Dubliner admits lure of signing for Tallaght club was too much 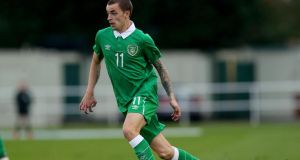 Shamrock Rovers have confirmed the signing of 24-year-old Dubliner Seán Kavanagh, who had looked set to sign for Derry City after having trained with them last week.

The former under-21 international defender had been lined up by Kenny Shiels as a replacement for Dean Jarvis and the City boss says he was taken aback to be informed a couple of days ago that Stephen Bradley had stepped in to make the player an offer that he did not want to refuse.

“I was really close to signing for Derry,” admits Kavanagh who returns to Ireland after more than six years at Fulham. “I was just waiting for my deal to get sorted at Fulham. But Rovers came knocking, I’m a Dublin boy and it’s tough to turn down Rovers.”

Kavanagh made 27 appearances for the London club but never quite managed to make the left back slot his own. Over the last year or so he had slipped down the pecking order and the Irishman had loan spells at both Mansfield and Hartlepool.

“I loved it at Fulham,” he says, however. “I was in the academy when Damien Duff was there and he was always good to me. I’m looking forward to catching up with him. It was a big achievement for me and my family when I made my debut.

“I found it tough in the second season; the manager brought in a couple of players in my position and sort of pushed me back in the pecking order. Then I got injured as well so that didn’t help. It happens in football. I played a few games with Hartlepool and Mansfield but I still look back on my time in England quite fondly.”

He plays in a position in which Rovers are, on the face of it, already quite strong with both Trevor Clarke and Luke Byrne able to fit in there and Ally Gilchrist also now available to play the role for Bradley. The Rovers boss insists that the new arrival can also fit in on either side of midfield but Shiels told the Derry Journal that he saw him as having the potential to be “the best left back in the league”.

Cork City, meanwhile, have brought in Preston North End’s 18-year-old English striker Michael Howard on loan until the end of June with manager John Caulfield moving to address the issue caused by a recent injury to one close season signing, Josh O’Hanlon, and the sending off on Friday night of another, Graham Cummins.

“When I was first told that Cork City were interested, I was kind of shocked,” says Howard, “but I couldn’t wait to get on the flight. I think it is a great opportunity for me. Since I went up to the first team I was quite close to Daryl Horgan and I speak to him quite a bit, and he said that it was a good bunch of lads and to enjoy it. His brother Colm is here as well too, which also helps me settle in.”

Although still young and inexperienced, Caulfield insists that the new arrival can make an impact. “He is still only 18 but we have watched him, and he has huge potential, so I think he will be an exciting player. He is very quick and a good finisher, he can play at centre forward and on the wing; he will certainly figure in games during the first half of the season and he comes straight into the squad for Friday’s game.”

Dundalk manager Stephen Kenny also said last week that he hoped to bring in another striker and the club are reported to be on the verge of signing Nigerian-born Marco Tagbajumi, a 29-year-old free agent who has had spells playing in England, Norway – where he grew up – and Cyprus.