Atletico battle back for Juventus draw; Bayern too strong for Red Star 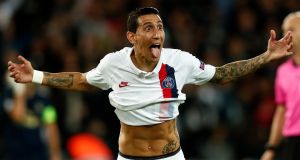 Angel Di Maria of Paris Saint Germain celebrates after scoring a goal against Real Madrid during the Champions League Group A match at the Parc des Princes. Photograph: Ian Langsdon/EPA

In the absence of the formidable trio of Kylian Mbappe, Neymar and Edinson Cavani, Di Maria provided two first-half goals as PSG suffocated Real throughout and Thomas Meunier added a third in stoppage time.

Zinedine Zidane’s Real, who eliminated PSG in the last 16 in 2017-18 and were also missing key players, failed to muster a shot on target and suffered their first defeat of the season.

PSG lead the standings on three points, ahead of Club Brugge and Galatasaray, who played out a goalless draw earlier on Wednesday.

Although PSG’s win could be seen as a statement, the French champions still have a long way to go before putting three consecutive last-16 eliminations behind them for good including last season’s embarrassing defeat by Manchester United.

With Neymar suspended and Mbappe and Cavani injured, Argentine Mauro Icardi started up front after playing his first half hour for PSG in a Ligue 1 game against Strasbourg last weekend.

He had little impact, though, as Di Maria made sure his compatriot’s lack of match time went unnoticed.

Eden Hazard started for Real, who also had to cope with the absence of the injured Marcelo, Isco, Luka Modric, Marco Asensio and Fede Valverde as well as the suspended Sergio Ramos and Nacho Fernandez.

PSG started fast and were rewarded for their early domination in the 14th minute when Di Maria stabbed the ball past Thibaut Courtois at the near post from Juan Bernat’s cross.

It was former Real player Di Maria’s 25th goal in his 100th appearance in a European competition.

He made it 26 in the 33rd minute, curling a superb shot past Courtois from 20 metres after Idrissa Gueye had cut through the Real midfield.

Real forward Gareth Bale found the back of the net shortly afterwards but the goal was ruled out by the VAR for handball.

PSG left little space to Real and Di Maria came close to making it 3-0, only for his chip to land on the roof of the net after the Argentine had been sent through by the impressive Gueye.

Real forward Karim Benzema beat Keylor Navas from close range in the 77th minute, but the goal was ruled out for a Lucas Vazquez offside.

Fullback Meunier wrapped up an emphatic win when he scored from close range one minute into stoppage time following a PSG counter-attack.

Atletico Madrid produced a typically spirited comeback from two goals down to draw 2-2 with Juventus in a thrilling finale to Wednesday’s blockbuster Group D opener.

Mexico midfielder Hector Herrera levelled in the 90th minute with a thumping header from a corner, after defender Stefan Savic had pulled a goal back for the Spaniards in the 70th with a header from close range.

Atletico were the brighter side in the first half but Juve went ahead in the 48th minute when Juan Cuadrado sent an unstoppable curling shot into the top corner after a break engineered by a punt forward from defender Leonardo Bonucci.

Juve’s Cristiano Ronaldo was kept unusually quiet after scoring a hat-trick against Atletico in last season’s competition, but his side doubled their lead in the 65th minute with a header from midfielder Blaise Matuidi following another quick counter.

But with bullish coach Diego Simeone motivating them from the sidelines and a typically boisterous Wanda Metropolitano crowd roaring them on, Atletico snatched a draw.

The two sides have a point each while Lokomotiv Moscow top Group D after beating Bayer Leverkusen 2-1 away from home.

Bayern Munich kicked off their campaign by easing to a 3-0 victory over Red Star Belgrade on Wednesday in a one-sided Group B encounter.

Kingsley Coman headed them into the lead in the 34th minute from a fine Ivan Perisic cross and the Bundesliga’s leading scorer Robert Lewandowski slid in for the second goal in the 80th.

Thomas Müller, who became the club’s record Champions League appearance maker when he came on as a substitute for his 106th game in the competition, volleyed in his first goal of the season in stoppage time.

Bayern, who stretched their unbeaten run in Champions League group stage home matches to 16, carved out chance after chance and twice hit the woodwork, while the Serbs, who battled through qualifying, were largely toothless up front.

Dinamo Zagreb made a perfect start to their Group C campaign when a majestic performance gave the Croatian side a 4-0 home win over Italian rivals Atalanta.

Midfielder Marin Leovac fired Dinamo ahead in the 10th minute before a Mislav Orsic hat-trick sent Atalanta reeling on their debut in Europe’s premier club competition.

The score did not flatter the home side as they missed several chances to win by a bigger margin, having ripped into the visitors with crisp one-touch passing and darting raids down both flanks.

Atalanta barely threatened and missed their best chance after the damage had already been done, as Dinamo keeper Dominik Livakovic pulled off a magnificent save to deny Duvan Zapata.