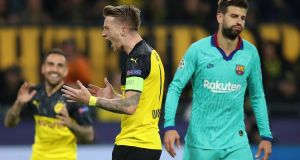 Barcelona goalkeeper Marc-Andre Ter Stegen’s double save from a penalty helped earn a 0-0 draw in their Champions League opener at Borussia Dortmund.

Just before the hour mark, the German produced a stunning stop at full stretch to deny countryman Marco Reus and then got up to calmly collect the bouncing rebound.

Replays, though, showed Ter Stegen had been off his line when the spot-kick was taken, but there was no VAR review.

Barcelona brought Lionel Messi on for the closing stages, to replace 16-year-old Ansu Fati, for a first appearance of the new season.

However, the Argentina playmaker was not able to help conjure a goal, seeing a stoppage-time effort blocked.

Dortmund had earlier hit the crossbar through substitute Julian Brandt and but for some wayward finishing, as well as the heroics of Ter Stegen, could count themselves unfortunate to have to share the points from the Group F fixture.

Substitute Nicolo Barella scored a stoppage-time equaliser for Inter Milan to rescue a dramatic 1-1 draw at home to Slavia Prague in their opening Champions League group game on Tuesday.

The Czech side, beaten on all six previous visits to Italy, took a shock lead through Peter Olayinka in the 63rd minute to stun the San Siro.

Inter were struggling to find a reply until Stefano Sensi smashed a free kick against the crossbar and Barella fired in the rebound in the second minute of stoppage time.

Despite Inter’s relief, they may still come to regret the loss of two home points in a group which also includes Borussia Dortmund and Barcelona.

Ajax Amsterdam gave a powerful reminder of their Champions League potential with a resounding 3-0 win over Lille in Amsterdam on Tuesday at the start of the group phase.

Last season’s surprise package look hellbent on a repeat of their heroics, which got them all the way from the preliminary rounds to the semi-finals, and goals from Quincy Promes, Edson Alvarez and Nicolas Tagliafico ensured an emphatic start to Group H.

Having come through the preliminary rounds again, Ajax went ahead when Promes, one of their new signings, powered home a header after 18 minutes, getting in between two Lille defenders at the back post to finish off Tagliafico’s cross.

Alvarez, also bought since last season’s run to the final four of the Champions League, added the second goal in the 50th minute as David Neres slipped him in with a short pass and the Mexican international hooked a stinging shot in from a tight angle.

Fullback Tagliafico, one of the smallest on the pitch at 1.73 metres, then rose majestically to head home Hakim Ziyech’s 62nd-minute corner and extend the Dutch club’s lead.

Lille, back in the Champions League for the first time since the 2012-13 season, had chances but saw Jonathan Ikone, Victor Osimhen and Mehmet Zeki Celik all hit good efforts straight at Ajax goalkeeper Andre Onana.

Olympique Lyonnais started their Champions League campaign in disappointing fashion as they were held to a 1-1 home draw by Zenit St Petersburg on Tuesday.

Memphis Depay’s penalty cancelled out Sardar Azmoun’s first-half opener as the French side, who have drawn six straight home Champions League games, dominated after the break without inflicting any serious damage on their opponents.

Zenit, who have now failed to win any of their last 10 European away games, dominated Lyon’s midfield in the first half before running out of gas.

A Timon Werner brace in the second-half gave Bundesliga side RB Leipzig a 2-1 win over Benfica in Lisbon, Haris Seferovic with a consolation effort for the hosts.

Erling Braut Håland became the first teenager to score a hat-trick on his Champions League debut since Wayne Rooney for Manchester United against Fenerbahce in 2004 as Red Bull Salzburg thrashed Belgian champions Genk 6-2.