Spread of Euro 2020 hosts shows a blindness to climate change 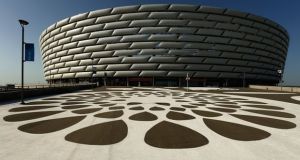 Getting to Baku in Azerbaijan is a long, expensive and carbon-heavy journey for football teams and fans. Obtaining a visa for a visit can be almost as awkward as the trip itself. Photograph: Robert Prezioso/Getty Images

Imagine a series of outline maps spanning England, Europe and, perhaps even, the world. They feature clearly highlighted contours and country boundaries but the neatly printed place names that customarily adorn atlases and globes are missing.

It is safe to assume that, asked to fill in the blanks and pinpoint specific towns and cities, a lot of people might make some embarrassingly bad guesses. But what price football fans proving the geographically literate exceptions?

Think about it; everyone who regularly follows an English league team on the road, knows which respective sides of the Pennines Bradford and Bolton belong to and would be mortified to get Wolverhampton muddled up with West Bromwich. If their club plays in Europe, or they are aficionados of the international game, those supporters are similarly unlikely to suffer a brain freeze when it comes to separating Budapest from Bucharest.

That duo will be in the news next summer when Hungary and Romania are two of the 12 countries hosting 24 teams and 51 matches at a strangely atomised Euro 2020. It is part of the tournament’s 60th birthday celebrations but the move away from one nation – or two at most – signals the sort of unfortunate timing that suggests football is, once again, behind the curve.

All those contrails constantly crisscrossing an area stretching from Baku to Bilbao en route to the eventual denouement in London will surely seem indicative of a sport apparently too arrogantly self-important to bother itself about the climate emergency.

Carbon-related concerns aside, common sense appears in short supply. At a moment when there is mounting worry surrounding certain European cities being overrun with tourists, it seems myopic to stage matches in three of the continent’s most rammed sightseeing locations: Amsterdam, Budapest and Rome.

Admittedly there should be few such problems in slightly more off-the-beaten-track Bucharest, while things should really shift a full 180 degrees in Baku – the host city which sits furthest east, a full 5,250km from the most westerly host city of Dublin. With costs high and obtaining visas a bit of a rigmarole, tourists are few and far between. So rare, indeed, that it is surprisingly difficult to buy a commemorative postcard, let alone a T-shirt, in an Azerbaijani capital geared much more towards catering for the corporate types typically found pacing Uefa’s corridors of power.

Were Greta Thunberg ever to face down those decision-making suits, her pigtails would surely flap with righteous indignation at the giant carbon footprint symbolised by the telltale white vapour streams stretching behind zigzagging aircraft carrying teams, supporters and media between assorted Euro 2020 venues.

For the moment at least, though, football’s all-consuming appeal ensures that fans who might breezily condemn members of the royal family – think Harry and Meghan – for jaunting off to the Mediterranean on private aircraft, happily turn a blind eye to the game’s collective executive jet habit. As any plane spotter worth their salt knows, Arsenal’s infamous 14-minute charter flight from Luton to Norwich in 2015 merely represents the tip of the, er, iceberg.

By 2026 – when a World Cup staged in Canada, the United States and Mexico will embrace countries comprising about 14 per cent of the planet’s landmass – such hypocrisies may be less acceptable. Even the most ardent football evangelist might feel that spreading the game’s gospel from Montreal to Mexico City is no longer the modern equivalent of missionary work but simply way out of synch with the prevailing zeitgeist.

A watershed beckons in 2022, when Qatar boasts of hosting the first carbon-neutral World Cup, all within a 31-mile radius of Doha. Of the eight grounds, the closest are three miles apart but integrated walking trails, cycle paths and a light railway join the dots, enabling fans to watch two games a day.

Considering the stadiums are modular – assembled from easy-to-deconstruct shipping containers, ready for partial or entire dismantling, donation, export and rebuilding in impoverished countries – it all appears a sustainability nirvana.

The irony is that there is also an awful lot not to like about Qatar – its well-documented role in the rise of Islamic extremist-fuelled terrorism, its treatment of expatriate labourers responsible for building the tournament infrastructure and a less than pristine human rights record.

Purely in environmental terms, the blueprint of the first such showpiece staged in the Middle East not only looks miles ahead of the curve but a decent template for major 21st-century high-density sporting events.

Caveats abound. Regardless of that sensitive, water-muddying, geopolitical backdrop, a month beneath Doha’s gentle winter sun may prove claustrophobically dull for some. Generally, though, an opportunity to get a proper feel for an entirely new culture and landscape is infinitely more rewarding than constantly shuttling between anonymous airport departure lounges and – increasingly – out-of-town stadiums.

Rather than failing to even peek beneath the surface of fleetingly visited host cities, staying awhile invariably represents the difference between recalling a place as just another generic “anywheresville” and somewhere invested with meaning and memories.

Travel, domestic and overseas, remains one of football fandom’s great joys while the anoraks among us will always delight at filling in the blanks on outline maps. After covering England’s Lionesses’ past three major tournament adventures, this writer’s party tricks include an ability to locate Canada’s Moncton, the Netherlands’ Deventer and France’s River Var.

If future generations are to be able to invest their own mental atlases with treasured recollections, significant tweaks to current thinking will be demanded – starting with a consensus that the environmentally damaging extravagance of Euro 2020 cannot be repeated. – Guardian

1 James Ryan injury could open the door for Ryan Baird
2 Shane Lowry finds some welcome form as US PGA looms
3 All in the Game: Klopp gets the last laugh in quiz show
4 Ken Early: Frank Lampard’s problems start at number one
5 Niall Quinn: postponed League of Ireland fixture ‘a blow’
Real news has value SUBSCRIBE
Crossword Get access to over 6,000 interactive crosswords