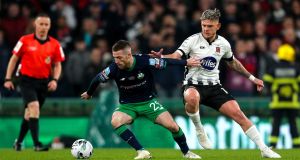 Shamrock Rovers won their first FAI Cup since 1987 after edging Dundalk in a penalty shoot-out, ending their treble dreams in the process.

There were times, quite a few of them, even here, in a game they had the better of, when it felt as though they might have allowed another chance to pass but having lost three finals since they last won one. But the long, long wait is over. Shamrock Rovers have lifted the FAI Cup again.

It was not, said Vinny Perth beforehand, a season defining game for Dundalk and they are clearly entitled to go home believing that they have had a good campaign. For Rovers, though, this will go down as a great day, perhaps one the marked the start of something bigger, with Stephen Bradley’s side showing tremendous character to hang in after having conceded an injury time equaliser in normal time then convert all four of their spot kicks in the shoot out that ultimately decided it.

Jack Byrne, Joey O’Brien, Greg Bolger and Gary O’Neill all scored at that stage after Aaron McEneff had initially appeared to give them a decisive advantage just a minute or so short of the 90, also from the penalty spot.

The Dubliners, to be fair, had played the better football for the best part of the afternoon and much of what was good about them revolved around Byrne whose use of the ball was key to their success in keeping the league champions just a little off balance for long stretches, especially early on.

Any highlights package of the game is bound to include a few examples of his work, the best of them involving angled balls into space just in front of or behind the Dundalk back four for Ronan Finn, Graham Burke and Aaron Greene.

There were some beauties and the two that looked most like they might lead to an opening goal over the course of the opening hour were to Burke inside a minute or so of each other. He had few other options the first time but his shot was straight at Gary Rogers, but the 26 year-old blasted the second well over when Greene and Aaron McEneff were screaming for him to cross instead.

For a while, Byrne’s influence seemed to have the potential to help make this a great final but that it not be remembered more in the end for the intensity of the contest that any outstanding overall quality. Both teams seemed to lose their way a bit as the second half wore on and neither period of extra time had an awful lot more going for it other than the tension that had taken hold among the 33,111 spectators.

It was during that half an hour, though, that Dundalk seemed most likely to make their experience of coming through some equally big tests tell but the closest they came to grabbing a goal was in the 120th minute when Georgie Kelly suddenly found himself in a position to shoot from close range and Alan Mannus made a reaction save without really seeming to know all that much about it.

The northerner would be hero in the shoot out too with his save of Daniel Cleary’s penalty a key moment after Michael Duffy had struck the bar.

The greatest drama, though, had been packed into the dying moments of the 90 minutes.

After good work by Burke, the Dubliners won their penalty because Rogers took the legs of Greene as the striker sought to go around him, and McEneff rather coolly converted. Behind Mannus’s goal the celebrations seemed to have already started but two substitutions extended added time and Dundalk saved themselves in the 94th and very last minute with Duffy making amends for a generally quiet day by burying a Hoban cross that came his way via the back of Roberto Lopes.

Both sides will wonder about some of their finishing before that with an early Ronan Finn miss perhaps the one that would have been best remembered had his side not prevailed in the end.

Dundalk may still regard it as a treble that got away for they struggled in midfield when they usually excel and clearly missed both Chris Shields and Pat McEleney from a team that had to be slightly re-jigged before the kick-off.

Bradley’s side handled the occasion well, though, containing the league champions well at one end and showing the greater composure too in their attacking play. When the records are reviewed, people will marvel at how the club could have gone 32 years without winning this competition.

It will be a source of pride, though, that they beat the best side in a generation to end the run, though, and they will feel after this that they can spoil a few more big days for the Oriel Park outfit.

1 In turmoil on and off the pitch: Where did it all go wrong for Barcelona?
2 College football turns blind eye to Covid-19 by risking players' health
3 Rugby impasse continues as no deal reached in fourth round of IRFU salary talks
4 Limerick’s Shane Dowling forced to retire at 27
5 The Best Of Times: Harrington stares down Garcia in epic Claret Jug battle at Carnoustie
Real news has value SUBSCRIBE