Leicester City keep rolling on with win over Crystal Palace 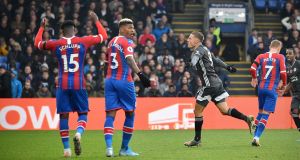 They couldn’t do it again, could they? As Leicester supporters will tell you, stranger things have happened. Another victory for Brendan Rodgers’s clinical side means they have now amassed one more point at this stage than during the title-winning season in 2015-16, with Caglar Soyuncu’s header and Jamie Vardy’s late strike ensuring they moved back above Chelsea into third spot.

Yet if they are to stand a chance of keeping pace with Liverpool and Manchester City when it really matters, Rodgers must know they will need more than their fair share of luck. That was certainly the case here as Jonny Evans was fortunate to escape with just a yellow card for scything down Cheikhou Kouyaté a few minutes before his defensive partner popped up with opening goal.

The visiting side were deserved winners in the end, however, as Vardy’s goal two minutes from time following excellent combination play with the substitute Demarai Gray rounded off the victory. In truth Palace had never really looked capable of finding a way through a defence which is now the Premier League’s joint-best with Sheffield United having conceded only eight times.

Given that their last outing resulted in the 9-0 thrashing of Southampton that set a new Premier League record for an away win, it was perhaps unsurprising that Rodgers stuck with the side that performed so well on the south coast. Roy Hodgson made two changes from Palace’s draw at Arsenal with the goalkeeper Vicente Guaita returning from injury and Jeffrey Schlupp brought in to replace the injured Andros Townsend. The last four meetings of these two sides had all ended in victory for the south London club, including a 5-0 thrashing on this ground in April 2018.

That and last season’s 4-1 win at the King Stadium in February which prompted the sacking of Claude Puel, contributed to a 13-1 aggregate score in Palace’s favour, yet this Leicester team is a different proposition altogether under Rodgers.

Harvey Barnes gave a glimpse of their considerable attacking threat in the fifth minute but his shot was straight at Guaita before Jordan Ayew also had a couple of early sighters following good work down the left flank from Wilfried Zaha.

With both sides adopting similar formations and packing the midfield, this was always likely to be a tight affair and it took a moment of brilliant improvisation from Barnes to set up Leicester’s first real chance.

His back-heel picked out James Maddison to play an inch-perfect pass for Vardy, only for Guaita to deny the former England striker from a tight angle. Evans headed the corner over the bar after a great cross from Maddison.

Palace’s home record is much improved these days after struggling last season and they also looked a threat in attack at times in the first half, although finding a way past Leicester’s defence is not so easy these days.

At the other end, Youri Tielemans should have done better with his shot after a quick corner and Ricardo Pereira mysteriously decided not to head Maddison’s free kick towards the gaping goal after out-jumping Gary Cahill and Guaita, otherwise Leicester could easily have taken the lead.

Having taken exception to a group of Palace supporters behind his goal who threw pieces of paper on to the pitch, Kasper Schmeichel was finally called into proper action five minutes before the interval when he tipped-over Schlupp’s deflected shot from distance.

A subdued start to the second half was brought to life when Evans could count himself very lucky to escape a red card for flying in on Kouyaté with a dangerous tackle. The Senegal midfielder was at his rangy best all afternoon and provided the perfect opportunity for Palace to go ahead with a superb cross from the right, only for Ayew to barely make contact with the ball six yards out. It was to prove a costly miss.

Having seen Guaita produce a fantastic save to tip over a bullet-header from Evans moments earlier, Palace’s defence should have been more alert for the next ball whipped in by Maddison. Yet a flick off the head of Patrick van Aanholt at the near post diverted the cross perfectly on to the forehead of the unmarked Soyuncu, who powered his effort in.

“We’re going to win the league,” sang the Leicester fans in the corner. Palace huffed and puffed but were kept at arm’s length pretty comfortably before Vardy applied the coup de grace late on, celebrating by mocking Palace supporters who had been on his back for most of the game. It could have been an even bigger win had Ben Chilwell’s late effort not come back off a post and Rodgers had to be satisfied with just the two goals this time.

Love tears them apart in stunning Epsom Oaks romp 16:33
Valterri Bottas pips Lewis Hamilton to pole in Austria 15:43
Chris Martin steals a point for resurgent Derby against Forest 15:23
Brighton see off doomed Norwich to edge closer to survival 15:09
Eamon O’Shea: ‘We spent quite a bit of time talking about older people rather than to older people’ 08:00

1 Eamon O’Shea: ‘We spent quite a bit of time talking about older people rather than to older people’
2 Monica Seles: The warrior queen who could have been the best ever
3 Brighton see off doomed Norwich to edge closer to survival
4 Sport crosses its fingers yet again as ministerial merry-go-round gets another spin
5 Valterri Bottas pips Lewis Hamilton to pole in Austria
Real news has value SUBSCRIBE