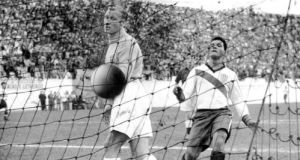 Frank ‘Pee Wee’ Wallace was the ubiquitous postman or mailman to use the American term, on the USA team that beat England 1-0 at the 1950 World Cup in Brazil.

There may be no official stipulation that a team of rank amateurs or ‘minnows’ to use the catchall phrase must contain one but it’s remarkable down through the years how often that particular vocation has popped up in international football amongst the ‘non professional’ brotherhood of players.

The Americans’ shock victory over the pre-tournament favourites in the Estadio Independencia, Belo Horizonte has been called, ‘The Miracle on Grass,’ and received the Hollywood treatment in 2005 when Gerard Butler starred in a film tribute: ‘The Game of Their Lives’. Coincidentally, it’s also the title of a book written by Geoffrey Douglas (1996), consisting a series of interviews and supplementary background on the team.

There is an Irish angle of sorts to the story. The majority of the USA squad were drawn from a couple of cities, St Louis, Missouri (Gino Pariani, Frank Borghi, Charles Colombo and Wallace came from the same neighbourhood) and Philadelphia, and were amateurs with day jobs, including a funeral parlour owner who drove the hearse, an interior decorator, a dishwasher and short order cook, a dock worker and a machine mechanic to highlight a few.

Eddie McIlvenny, born in Greenock, Scotland in 1924, was the only full-time professional, having togged out for Wrexham in the English Third Division over a couple of seasons before taking up an offer to visit his sister in New York (1949), initially as a holiday.

While there he was invited to play with the Philadelphia Nationals and under the impression that he would take out American citizenship McIlvenny was fast tracked into the national set-up. He wasn’t alone as Joe Maca was Belgian while Joe Gaetjens, who scored the goal that beat England, hailed from Haiti and played for the country of his birth both before and after his American sojourn. Fifa eligibility rules were patently a little more relaxed in those days.

After the World Cup Manchester United manager Matt Busby signed his fellow Scot, McIlvenny. It was to be a short lived stay at Old Trafford, as the player managed just two games, against Fulham and Liverpool but on the imprimatur of Irish international and United captain, Johnny ‘Jackie’ Carey, McIlvenny joined Waterford with whom he played for four seasons, making 57 appearances according to one source.

During his time there the midfielder helped the club to finish runners-up to St Patrick’s Athletic and twice played for League of Ireland selections. He also scored a goal in the 1955 FAI Cup semi-final against Drumcondra at Dalymount Park.

The match ended 2-2 with the Dublin side going on to win the replay before being beaten 1-0 in the final by Shamrock Rovers, with future Republic of Ireland manager Liam ‘Rasher’ Tuohy getting the goal. McIlvenny then moved to England, running a soccer school in Eastbourne, where he died, aged 69, in 1989 but not before being admitted to the USA National Soccer Hall of Fame in 1976.

He led the American team that day, an honour bestowed by fellow Scot, and team manager Bill Jeffrey in recognition of his only full-time professional player. Walter Bahr described his teammate as a player that “had incredible talent and that “he intercepted passes as though they’d been meant for him.” The irony was that in the 2005 film, Bahr is given the Hollywood profile as the ‘hero,’ complete with captain’s armband, rather than the Scot he so admired.

To provide some context to the World Cup in Brazil, a plethora of countries turned down an invite to participate, including the Republic of Ireland, Scotland, Russia, Czechoslovakia (1934 finalists) and Hungary (1938 finalists). Argentina, Peru, Austria, Burma and Belgium pulled out during the qualification process, while France and India withdrew after the draw was made. Germany and Japan weren’t encouraged to take part.

England, participating in a World Cup for the first time, were favourites to win the tournament, an impression further cemented by a 2-0 victory over Chile in their opening match.

The USA lost 3-1 to Spain. The Americans had led 1-0 but conceded three goals in the last 10 minutes suggesting that weren’t quite “the sheep to slaughter” as Jeffrey suggested ahead of the greatest moment in their soccer history, just four days later on June 29th.

England manager Walter Winterbottom - he would take charge of the national side in four World Cups, the first of which was in Brazil - presided over a star-studded side that had won 23 of 30 internationals, home and away since the end of World War 11.

Billy Wright was team captain, and despite deciding to rest Stanley Matthews and Jackie Milburn for the USA game, Winterbottom still had players like goalkeeper Bert Williams, future England World Cup winning manager, Alf Ramsey, Tom Finney and Stan Mortensen on duty. England mustered six shots in the first 12 minutes, hitting the woodwork twice as the USA team re-enacted their version of the Alamo, albeit with a happier outcome.

In the 37th minute the Americans managed the unthinkable. McIlvenny found Bahr with a throw-in and as the English defenders backed off, Bahr launched a speculative shot from 25-yards and just outside the angle of the box. Gaetjens threw himself at the ball and got the slightest of deflections, deceiving Williams, the ball nestling in the English net.

Grainy footage of the goal shows the shot but not Gaetjens’ acrobatics. There’s an argument as to which team was more stunned. The USA’s Harry Keough recalled in an interview many years later: “Nobody in our team dreamed at half-time that we would win this game 1-0.” That they did was largely thanks to the heroics of goalkeeper Frank Borghi, an executive director of a St Louis funeral home.

His athleticism and willingness to come for crosses averted many dangerous moments but it still took the definitive intervention of centre-half, Charles ‘Gloves’ Colombo, so called because he wore them in matches.

Mortensen was through on goal with only Borghi barring his path, when Colombo resolved a potentially dicey situation by launching himself, full length, into the back of the English centre forward’s knees and wrestling him to the ground.

Keough recalled: “Colombo looked like he was too far behind him. He dived, headlong and grabbed him around the knees and they both hit the ground. Colombo said to me, ‘he was getting away; I had to stop him somehow.’ That’s the way Colombo was.” The Italian referee Dattilo Generoso lived up his surname from an American perspective and didn’t send off the defender.

Some of those players lived on in the American sporting consciousness, directly or indirectly

In the immediate aftermath The New York Times carried just two paragraphs on the game initially believing the score-line to be a hoax while it was reported that some British newspapers changed the wire copy to England 10 USA 0 on the basis that the final score was a misprint.

Both teams failed to progress further in the tournament, the USA losing their final game to 5-2 to Chile while England were beaten 1-0 by Spain. Gaetjens, the man who shook the football world with his goal, disappeared in tragic circumstances.

After a short spell playing in France he returned to Haiti and in 1963 the Tonton Macoute, the militia of dictator Francois ‘Papa Doc’ Duvalier, came for Gaetjens one night to take him to Fort Diamanche jail. His family was politically active according to Keough. Gaetjens was never seen again, believed to be murdered. There was some grumbling, understandably, that the US could and should have intervened.

Some of those players lived on in the American sporting consciousness, directly or indirectly. Bahr’s sons, Chris and Matt, both went on to be famous kickers in American Football’s NFL, while others like ‘Pee Wee’ Wallace - he was born Frank Valicenti but the family decided to change their surname - had interesting back stories having fought in WW11 and spent 16 months in a German prisoner of war camp.

Perhaps Bahr’s words are the most apposite in modestly appraising the American triumph. “The perfect game is to win and play well. We won but we certainly did not outplay England. It was one of those games where the best team does not win. I am proud of it. We had a decent team. But if we played England 10 times, they would have won nine of them.”