Morrissey gives Cork the edge in another fast and furious affair 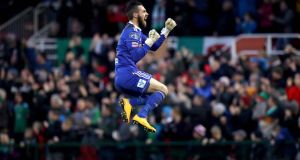 If this were a movie franchise it would have long run out of steam by now, but five years after Cork City and Dundalk set themselves up as the country’s undisputed top two the games their rivalry produce seem only to get faster and more furious with each passing encounter.

After a cautious start, the fierce determination of each side to get the better of the other here made for a compelling conclusion but Dundalk were chasing things by then after Géaroid Morrissey’s second goal of the season had shifted things in the home side’s favour.

“We said at half-time there would be a chance,” said Cork City manager John Caulfield as the celebrations that greeted the final whistle continued all around him. “These games are tight, so whoever takes their chance will win.

“It’s just another three points. Rovers on Monday will be an unbelievably tough game given the quick turnaround so early in season but we were number of points behind a few weeks ago and now we have won four on bounce with a lot of new players having come in and done well.”

Danny Kane deservedly got a special mention after impressing from beginning to end in what was his league debut but centre half Conor McCarthy was the TV pundit’s pick for man of the match and Caulfield wasn’t contesting the decision.

“We knew our two central defenders would have to stand up and defend against Pat Hoban but any of the back four could have had it.”

McCarthy himself was more interested in the collective success.

“To win 1-0 was sweet,” he said. “We suffered up there when they were celebrating our 1-0 loss so it was nice to get it. We have four clean sheets in a week and a half so we’re happy with that and Chops [Morrissey] pulls that off in training every day so it’s nothing new to us, he’s a quality player.”

It was a quality win but nothing much like the 1-0 hiding City took in Oriel Park back at the start of the season. Stephen Kenny must have wondered through the closing stages how it was that for all the chances his side seemed able to create, they couldn’t quite manage the finish they needed to haul themselves level and salvage the point required to keep their noses in front at the top of the table.

His initial disappointment though will have been at the way his side conceded in a contest that the two defences seemed to dominate for lengthy stretches.

Their one real chance to score during the first half had fallen to Daniel Cleary, whose header towards the foot of Mark McNulty’s post left the goalkeeper to look on helpless and hoping for the best through the drawn out second or two that it took the ball to bounce away to safety.

And Cleary, like McCarthy, was brilliantly effective at the other end with the 22 year-old doing quite a job on Graham Cummins.

The City striker was left short of support through the early part of the game as Dundalk nudged the home side onto the back foot in midfield, but the centre backs seemed to win absolutely everything that came their way, adding insult to injury by picking up a handful of free kicks in the process.

Cummins clearly didn’t appreciate the nature of the contest at times but it was competitive all around with Seán Gannon unable to return for the second half after a clattering by Conor McCormack, and Pat Hoban heavily bandaged around the head.

With Jimmy Keohane struggling to stay in things after what had been a strong start, Caulfield looked to shift things up a gear in midfield and Garry Buckley’s arrival had the desired effect.

Within a minute or so, the hosts were in front, the visitors never really having recovered their composure after Buckley had struck the crossbar from close range. Dundalk’s defence got the ball as far as the edge of the area but pretty much everyone stood rooted to the spot as Morrissey met it with a strike that flew low back through a crowded area and beyond Gary Rogers’s desperate effort to keep it out.

The goal had Dundalk reeling for a bit and City might have made it 2-0 within three minutes when Cummins finally got free but fired narrowly over as he arrived to meet a low cross at the far post. Kenny’s men threw everything into chasing the game after that, though, and there were chances in an in increasingly open contest for Robbie Benson, John Mountney and Ronan Murray.

Benson certainly should have done much better with his effort and only Murray really forced McNulty into a save worth talking about. In front of him, though the City defenders were throwing themselves into everything and Dundalk simply couldn’t save themselves.

“You have to contend with these things,” said Kenny afterwards, “it’s a fact of life. When we passed it in the final third, we created some good chances. Overall, we can be better but it was difficult. Cork close you down at such a rate.”

They did well to avoid getting caught on the break on occasion with Caulfield’s side always looking for openings. Karl Sheppard belatedly started to make a major impact and Kieran Sadlier, coming on again from the bench, looked a threat late on.

After such a subdued first half, it was tremendous stuff. Dundalk will have to pick themselves up again but the good news is there will be another two instalments this season.

The question is: How long can the cast of characters keep sending us away already wanting to come back for more.