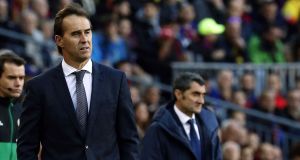 Julen Lopetegui has been sacked as Real Madrid coach after a 5-1 defeat to Barcelona on Sunday. Photograph: Toni Albir/EPA

Julen Lopetegui has been dismissed as Real Madrid manager only 138 days into the job that cost him his chance to lead Spain at the World Cup.

Lopetegui was sacked by the Spanish Football Federation in June after the RFEF president, Luis Rubiales, claimed to have found out just five minutes before the appointment was made public and two days before the tournament began; now he has been sacked by Madrid in the wake of their 5-1 hammering by Barcelona on Sunday.

That defeat was Madrid’s third in a row in La Liga. The midfielder Casemiro called the team a “disaster” and described the defeat as the “image of our season”.

Madrid had previously gone eight hours without scoring, just 12 minutes short of their worst-ever run, and they have lost five and won only one of their past seven matches – an unconvincing 2-1 win against the Czech side Viktoria Plzen that ended with supporters whistling to show their dissatisfaction. Defeated in the European Super Cup on his competitive debut, Lopetegui has lost as many games as he has won in all competitions: six of 14.

On Sunday, Lopetegui insisted he had the “strength” to carry on but the decision was not his. Madrid currently sit ninth in the table and the club released a statement on Monday evening confirming that they had unilaterally released the coach, who has now been sacked from the two biggest jobs in Spain in just four months. There was no press conference or appearance from the president to explain the decision.

“The board understands that there is a great difference between the quality of the Real Madrid squad, that has eight players nominated for the Ballon d’Or, unprecedented in the history of the club, and the results achieved until now,” read a club statement. “We are grateful to Lopetegui and his staff and wish them the best in their professional career.”

Santiago Solari, who manages Madrid’s B team Castilla, will take over on an interim basis, starting with Wednesday’s trip to face Melilla in the Copa del Rey.

Madrid had briefed that they would bring in the former Chelsea manager Antonio Conte, who they contacted over three weeks ago, but talks stalled on Monday. Although there is no definitive decision, there was little optimism that a deal would be done with the Italian. The reason for that is not yet clear, but Madrid captain Sergio Ramos had made it clear that he did not welcome the prospect. Asked about the prospect of a manager like Conte with “mano dura” – an iron fist – arriving at the Bernabéu, Ramos replied: “Respect is earned, not imposed.”

Although he did not name them, Ramos clearly referred to Vicente Del Bosque, Carlo Ancelotti and Zinedine Zidane, none of whom are authoritarian and who had a close relationship with the squad, when he added: “We have had success with coaches that I don’t need to name but you all know. Sometimes knowing how to manage a dressingroom is more important than technical ability.”

Madrid’s president Florentino Pérez believes that he needs a manager to lead a dressingroom that has become too comfortable, but the prospect of conflict from the start is not one that Conte can have relished.

One of the criticisms Pérez levelled at Lopetegui was that he was too indulgent of the squad and he rapidly lost faith in the coach – at least in part because he did not have much faith to start with.

After Zidane announced his surprise resignation, Madrid sought to bring in a series of managers to take over, including Mauricio Pochettino and Max Allegri, before eventually turning to Lopetegui in the face of extremely limited options.

Few wanted to follow Zidane, winner of three Champions Leagues in a row. Some saw flaws in the squad, too – Zidane himself had warned of the need to make changes after a season in which, while they won the European Cup, Madrid finished third, 17 points behind Barcelona.

For Lopetegui, the opportunity was one that he could not pass up – he didn’t think it would mean the chance to coach Spain at the World Cup would be denied him. He did not request that Madrid wait or that conversations be held with the federation, whose president was furious when he was presented with a fait accompli.

Lopetegui was unveiled at the Bernabéu the day after he had been sent home from Russia. “Yesterday the saddest day of my life; today is the happiest,” he said.

It would always be difficult to disassociate the two days: being Madrid manager was always likely to be tinged with some regret, even if he was successful but he hasn’t been. Although Madrid started the league season brightly and were impressive in their Champions League debut against Roma, results soon deserted them. Lopetegui lamented injuries and bad luck, but that excuse did not convince.

He was careful not to publicly challenge decisions made at boardroom level but with Neymar the only player Madrid were prepared to spend big on and the market shifting, the squad has got weaker over the last three years. That morning, El Mundo published an interview with Lopetegui’s elderly father in which he complained “they have taken fifty goals off” his son, with the departure of Cristiano Ronaldo.

Pérez was also unhappy that there was no place for 18-year-old Brazilian signing Vinicius, who Lopetegui left in the B team. The club’s legal staff managed to get a ban overturned following a red card playing for Castilla last weekend, freeing Vinicius to play the clásico on Sunday. He travelled with the team, missing the Castilla game, but Lopetegui left him out of the matchday squad.

The manager’s position had already become all-but untenable. The clásico might have been an opportunity to avoid the inevitable, and some players expressed their support, but Madrid were defeated 5-1 and slipped seven points behind their rivals. “I know how football is,” he said afterwards. - Guardian