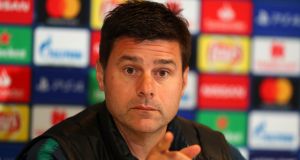 Mauricio Pochettino turned down an approach from Real Madrid in the summer before signing a new five-year deal with Tottenham Hotspur. Photograph: Catherine Ivill/Getty Images

Mauricio Pochettino has brushed aside reports linking him with Real Madrid as Tottenham confirmed they would not be playing in their new stadium until next year.

The Spurs manager turned down an approach from the Champions League winners to succeed Zinedine Zidane in the summer and signed a new five-year deal. With Julen Lopetegui facing a battle to keep his job, reports in Spain have suggested the Madrid president, Florentino Pérez, is hoping to tempt the Argentinian to change his mind.

But Pochettino has insisted he is fully committed to Tottenham despite delays to the completion of their new stadium. “Will I be moving in too? Yes,” he said. “When we move, I expect to move there. Only Daniel [Levy] can say: ‘The club is going to move, but you gaffer no.’”

Asked about Madrid he said: “I don’t have social media so I don’t receive much information. That’s why my head, my face, I look younger than I am. Stuff like that happens in football. You can’t change anything.”

Levy, meanwhile, has confirmed that Tottenham will not play at their new stadium until 2019 because of “contractors missing deadlines and possible future unforeseen issues.”

In a statement on the club’s website the chairman said: “There isn’t an hour that goes by when I am not asked when we will be able to stage our first game at our new home. Whilst we are conscious of the need to keep pressure on our contractors to deliver as soon as possible, we are also acutely aware of how difficult the lack of clarity is for you, our supporters, to plan around games, particularly those at Christmas and New Year.

“In light of the above, and taking into account the restricted availability of manpower over the festive period, we have taken the decision to confirm today that all home games will be played at Wembley Stadium up to and including the game against Wolverhampton Wanderers on 29 December. We shall look to update you again in early December.”

Pochettino admitted he was not concerned that Sunday’s NFL game at Wembley between the Jacksonville Jaguars and Philadelphia Eagles 28 hours before kick-off against City could harm their chances of beating the Premier League champions.

“Maybe it’s good for us,” he said. “We are going to face one of the best teams in Europe in Manchester City, so maybe it will help us. It wasn’t the plan for us to play in this period at Wembley – that is the problem. But we have to accept the reality. We cannot change that and now we have to hope the weather will be good and not kill the pitch so we can play in a very good condition. I’m sure that the people who prepare the pitch will work so hard to make sure it is ready.”

Tottenham trail City by only two points after seven wins from their opening nine matches. They recorded three successive league wins against City in 2015 and 2016 but were last season beaten twice by Pep Guardiola’s side.

Pochettino admitted it would be hard for his players to compete against such a formidable side but believes the resolution of their stadium move could allow them to make a more sustained title challenge.

“Manchester City are on another level,” he said. “It’s difficult to compare us with them. We want to reach this level in a different way but still we are fighting to achieve that. When the club is settled in the new stadium it will be easier to work towards the same level as City.”

Pochettino rejected the idea that it is almost impossible to defeat City: “In football nothing is impossible. We believe we can beat them.”

The manager said Dele Alli had recovered from the hamstring injury that has caused him to miss the past month, as Spurs prepare for a gruelling schedule of four fixtures in nine days. They face a trip to West Ham in the Carabao Cup on Wednesday followed by a meeting with trip to Wolves in the Premier League next Saturday and a Champions League game against PSV Eindhoven three days later. - Guardian