John Caulfield happy to do things the Cork City way 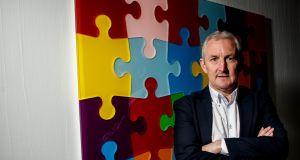 Cork City manager John Caulfield: “A lot of injuries clear up in the week of a cup final.” Photograph: James Crombie/Inpho

Cork City boss John Caulfield believes that the overseas investment that has come into Dundalk since last year’s FAI Cup final has deepened the differences between the two clubs. Yet the former striker denies he is envious of the position Stephen Kenny finds himself, and insists he is up for the challenge any new money coming into the league presents.

“Five years ago I went into professional football with a plan, with a vision. I brought key management people in with the objective of growing the club, making it competitive and seeing where we’d go from there.

“That’s what we’ve done. I don’t look at other clubs because we are doing it the way we need to do it, we’re running it well. But at the end of the day, as we’re seeing across the world, if a team invests heavily and hugely, the chances are they’re going to dominate and that’s the way it is.

“We don’t take outside investment and that’s fine. But do I envy other clubs for getting that investment? No. It does change the goalposts, though. If a team keeps investing heavily and buying all the best players, of course you expect them to win. But what we’ve got to do is keep overachieving, keep working as hard as we can do, keep bringing players through, see can we sell a fella, one player a year, get into Europe and keep our wheels going. That’s the ethos of our club, and that’s the way we do it.”

City renew their remarkable rivalry with Kenny’s men this coming Sunday at the Aviva stadium, where, having come up short in their defence of the league title they won last year, Caulfield and Co will be looking to secure a third straight FAI Cup.

Pat Hoban limping out of Dundalk’s game at Dalymount on Friday night has raised the prospect of the Premier Division champions having to go into the game without the league’s top scorer, but Caulfield is dismissive of the suggestion that the striker might be sidelined at the weekend.

His confidence is born in part out of his own experience these past few days with Cork City players who have been struggling of late all gearing up to make themselves available too.

Steven Beattie laid down a marker in Friday’s final league game by getting an hour under his belt, and Caulfield says Karl Sheppard has also overcome a hamstring strain and should come into the picture.

“It’s a unique occasion in players’ lives,” he says. “It’s the one week that is different to any other. The league is week in, week out, but the cup final is different. Everyone wants to be in the 18 so there is an edge and you’d expect that. A lot of injuries clear up in the week of a cup final.”

And with a full squad to choose from Caulfield is confident his side is in with every chance of winning despite the gap suggested by the final league table.

When asked if the team has a point to prove after the last meeting between the two side’s at Turner’s Cross where the visitors won by a narrow margin but with surprising ease, he said: “The lads are determined, but they don’t have a point to prove to me. We went through a patch where we lost a couple of games, lost confidence, had a few injuries. But our form throughout the season…we’ve scored 71 goals, that’s two goals a game, just over half a goal conceded, we’ve 20 clean sheets. We just had a bad three weeks and these things happen.”