LOI round-up: Shamrock Rovers show their class at the Brandywell 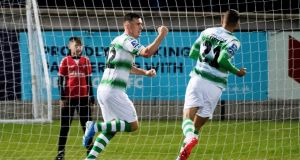 Shamrock Rovers recorded their second victory at a blustery Brandywell, their class telling during the second half.

In what proved an end to end affair, referee Rob Hennessy awarded two penalties – one to each side – with Derry failing to take advantage of their spotkick.

In the end, a Rovers penalty from Aaron McEneff followed by an Aaron Greene strike was enough to put the game to bed as the Dubliners consolidated second spot in the Premier Division table.

The attendance of 2,500 made themselves heard as the Limerick official flashed three yellow cards within the space of 10 minutes as the battle intensified midway through the opening period.

Ronan Finn received the third of those cards following a challenge on Ciaron Harkin and from the resultant Gerardo Bruna free-kick, Finn deflected the ball over his own crossbar in the 31st minute.

Five minutes later at the other end Derry keeper Peter Cherrie pulled off a superb save to deny Graham Burke’s stinging drive and the home side breathed a sigh of relief.

Two minutes before the break Bruna attempted a shot from distance and while Rovers ’keeper Alan Mannus dived at full stretch, the shot screamed agonisingly wide of the upright.

Derry threatened on the break during the early exchanges of the second-half when Barry McNamee played Jamie McDonagh into a promising position but the winger’s shot flew across the face of goal and wide of the target.

In the 54th minute Derry broke again on the right, McDonagh’s pass left by McNamee before Harkin ballooned his shot over the bar when he should have done better.

The match was turned on its head in controversial fashion in the 61st minute when Jack Byrne dropped to the ground under a challenge in the penalty area. The referee pointed to the spot and McEneff drove the ball home .

In the 71st minute the referee presented Derry with a penalty after Lopes was ajudged to have impeded Parkhouse, however, the Derry striker was denied by Mannus much to the disappointment of the attendance.

Rovers then ended the match as a contest in the 75th minute following a slick move on the left, which saw Greene sent scampering and the winger raced into the penalty area to give Cherrie no chance.

Glen McAuley and Dave Webster were the St Patrick’s Athletic goalscorers once again as they came from behind to secure victory for the second week running.

Last week’s second-half revival against Bray Wanderers kept Harry Kenny’s side in the FAI Cup with strikes from Webster and McAuley.

Back at Richmond Park on Friday, the Inchicore side kept their hopes of Europe alive via the league with another rousing second half display.

Though St Pat’s enjoyed plenty of possession early on they struggled to create much in the final third.

Gary Shaw raised an expectant roar from the home faithful on 20 minutes when turning well to drill a shot wide.

Two minutes later there was a collective groan from the St Pat’s fans as Sligo took the lead.

Kris Twardek did the spade work, getting to the byline on the right to cross for Parkes to casually shoot low to the net for his eighth league goal of the season.

Ed McGinty kept Sligo in front with a fine reaction save from Shaw’s glancing header before a terrific block by John Mahon from Dean Clarke also prevented a St Pat’s equaliser two minutes before the break.

St Pat’s started the second half with far more impetus and were duly level six minutes in.

Darragh Markey threaded a pass into McAuley who showed delightful feet before rifling a rising right-foot shot to the far corner of the net.

Maintaining the pressure, St Pat’s Cian Coleman looked set to put them in front on 70 minutes but for another superb block tackle, this time from Lewis Banks, before St Pat’s won it on 83 minutes.

Jamie Lennon whipped in a free kick from the left for defender Webster to score with a towering header.

Alan Reynolds’ side remain just four points above the relegation play-off zone and JJ Lunney’s response arrived too late to ignite a comeback in the Munster derby.

After finishing in the top four last season, these two clubs are competing in the bottom four this term and it showed in a lacklustre opening 45 minutes.

The best chance of the half fell to Kenny Browne on the stroke of half-time when he side-footed Tom Holland’s corner just wide.

Cork also toiled at the other end, relying on a long distance shot from Kevin O’Connor which cleared the crossbar by a yard for their closest opportunity.

The Preston North End loanee is lethal from set-pieces and City nicked the lead from one of his inviting corners three minutes into the second half.

It says much about Cork’s season that McCarthy is their top scorer but he displayed a striker’s instinct by stabbing home a volley inside the six yard box.

Waterford’s reaction, like their season to date, was lacklustre and they were caught at the back for Cork’s second on 69 minutes.

O’Sullivan’s firepower helped the Blues win the First Division in 2017 and the 36-year-old proved he still has it by slipping past Robert Slevin and burying a low shot beyond Matt Connor.

Midfielder Lunney nodded Kevin Feely’s cross past Mark McNulty late on but Cork held on for a deserved victory.

1 America at Large: On Long Island, longing for a return to our field of dreams
2 ‘For 25 minutes I ran out of oxygen’: Pepe Reina on his coronavirus battle
3 Kevin Mitchell: Hard to figure out why it took so long to cancel Wimbledon
4 Woods and Mickelson to play coronavirus relief match – reports
5 ‘This is sick’ - seventh-tier Swedish club cancels friendly after betting mayhem
Real news has value SUBSCRIBE