No European hangover as Dundalk hit Finn Harps for five 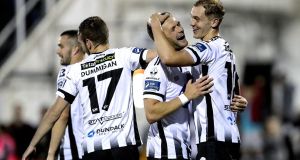 There was no sign of a European hangover from league leaders Dundalk FC as they put 10 man Finn Harps to the sword at Oriel Park on Friday night.

Having been eliminated from the Europa League against Slovan Bratislava just 72 hours earlier the visit of Ollie Horgan’s side was a potential banana skin for the champions.

Having made six changes from the game in Tallaght, Vinny Perth’s side showed their quality with a five star display which saw them retain their seven-point lead at the top of the Premier Division table.

In-form Harps, who are battling to avoid relegation, had made life difficult early on for the Lilywhites but a couple of mistakes for the the opening two goals from Daniel and Georgie Kelly either side of half-time proved crucial. Their lack of discipline also came back to haunt them once again following Mark Russell’s sending off before the break.

The home side dominated possession right from the off but were largely frustrated by the Donegal men for the opening half hour until a Patrick McEleney effort, which clipped the crossbar, sparked them into life.

Four minutes later Sean Murray drilled wide from the edge of the box and when another effort from the midfielder was blocked moments later by Keith Cowan there appeared little danger for the visitors. However, Harry Ascroft gifted possession needlessly to Daniel Kelly, who raced through before firing high to the net past Mark McGinley to give Dundalk a 36th minute lead.

Ascroft would go close twice in quick succession after that but Harps’ hopes suffered a huge blow on 40 minutes when they were reduced to 10 men after Russell picked up a second yellow for a foul on Daniel Kelly having been booked for a foul on the same player in the 12th minute.

After that it was all one way traffic with Harps goalkeeper McGinley making fine saves to deny Georgie Kelly, McEleney and Murray early in the second half.

The crucial second goal finally arrived on 61 minutes, however, when substitute Joshua Smith’s short back pass was seized upon by Georgie Kelly who slid in to make it 2-0.

It was one-way traffic after that with McEleney making it 3-0 four minutes later with a close range finish from Cameron Dummigan’s cross for what was his first goal since last November’s FAI Cup final.

McEleney then turned provider for the fourth on 74 minutes when his ball in from the left picked out the run of McGrath who took a touch to steady himself before drilling through the legs of McGinley.

McEleney then completed the scoring a minute from the end when he raced through to dink past McGinley.