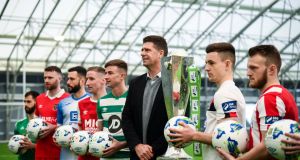 Niall Quinn at the launch of the 2020 League of Ireland season. Photograph: Stepen McCarthy/Sportsfile

Kieran Lucid will be back in Belfast on Thursday meeting clubs and, he expects, the IFA, as he moves on to presenting a range of options on how league structures might be changed for the better on the island of Ireland.

Some of the six items menu are a long way short of the transformative all in, All Island League model he set out to sell to clubs a couple of years ago, with the tech entrepreneur acknowledging that opposition from the association in Belfast has dented the prospects of that plan at this moment in time.

Hypercube, the Dutch consultants he brought in to assess the case for change based on data provided by the clubs, advised him to be more flexible in terms of what might be achieved, he says, but he admitted a couple of weeks back that the process had become more complicated from his perspective as a result. “It’s kind of an exploratory process to thread the eye of the needle between acceptance by the football authorities and commercial attractiveness,” he said.

It remains hard to see what, other than wider political considerations, has gotten in the way of his original proposal at what was effectively a preliminary stage. Had Lucid failed to come up with the sort of money he was talking about then the IFA and its clubs could easily have walked away, but their reluctance to allow him even to get as far as presenting a united front to would be sponsors and broadcasters seems hard to explain if the welfare of the clubs was really the first consideration.

Lucid himself insists that the most radical option is not off the table and he remains hopeful but others proposals being put forward for consideration range from doing nothing at all, to replacing both League Cups with a cross border competition to a split season in which teams compete in their old leagues first to decide titles and European places, before embarking on an all island league phase of the campaign.

All have cases to be made for them but none has the obvious attraction of the original proposal.

“The reality is that there is more reticence up north,” he says ahead of Thursday’s meeting. “The IFA position has obviously been disappointing because I think if you were talking to football supporters in general there would be a comfortable majority in favour but among club supporters there is some reluctance too. We hope to keep talking and moving forward so this week will be another important step in the process.

“Down here,” he continues, “’it’s more ‘let’s go for it’. There is far more appetite for change.”

Clubs in the league here, of course, have been waiting for a meaningful discussion of governance and structures since the 2006 merger with the FAI failed to deliver anything like the promised benefits. There had been noises, more than once, about clubs asserting their independence again. The situation was complicated by them not knowing what the commercial deals done in relation to their league were worth, as well as a participation agreement that gave Abbotstown enormous power.

John Delaney’s departure has changed the landscape dramatically and Noel Mooney encouraged the clubs to seize the moment by making big decisions during his short time back from Uefa. It didn’t happen, though. Since then, the league has gained a couple of extra seats at board level and featured prominently in the financial agreement struck by the new leadership of the FAI with the government to save the association.

The problem now is that many of the underlying divisions within the league have come to the surface and as things stand there is a lack of clarity even with regard to which body is driving any decision making process.

Under Mooney, an eight club working group was established which came up with a range of options on new structures. The Premier Clubs Alliance (PCA), meanwhile, has primarily represented the interests of the top flight clubs and the First Division Alliance has come to prominence of late fighting the corner of the second tier.

They have found themselves in conflict with a reconstituted National League Executive Committee, effectively the board of the league which, in so far as it meaningfully existed at all during Delaney’s time, was seen as a means of him exerting control over clubs. Its decision to admit a Shamrock Rovers second team to the First Division now, in the face of opposition from the then other nine clubs, may have been upheld but has ultimately still damaged it.

And on Tuesday night all of the clubs met in another independent forum to continue considerations of how best to establish independent structures. In the circumstances, it is perhaps not surprising that The Irish Times spoke to one club representative who had fairly comprehensively lost track of all the committees and meetings their club was supposed to attending.

The Shamrock Rovers situation is, it seems, set to be defused on the basis of a deal that involves the club playing only under-21 players, and the association conducting a wider review of the situation which is expected to recommend the establishment of a new under-21 or reserve league. It is also believed to have committed to a strategy document for the league. The PCA recently published a document of its own and at least one other is said to be in the pipeline.

In short, there is a lot going on but very little sense of how it will all end, or when that will ultimately be decided.

Niall Quinn’s enthusiasm for the league is clearly welcome but he might only now be starting to realise the challenge involved in identifying a path forward that a range of clubs, whose interests are not always the same, will willingly buy into.

After various attempts at tinkering with formats, top flight numbers etc, the widespread enthusiasm for change on the scale initially proposed by Lucid showed that the clubs can be united. The very clear lesson seemed to be that it would require a plan that involved enough money for everyone to benefit substantially.

In the short to medium term, the All Island certainly still seems the most plausible route to generating substantial new revenues.

Quinn and the new regime are understood to have made some progress in terms of additional funding, but the clubs themselves need to find a new unity of purpose as they approach a future in which they can finally more of a say. Starting, perhaps, with identifying which forum it will be that makes the decisions that all can influence and then accept.