Home truths: deep divisions on how to produce better young players in Ireland 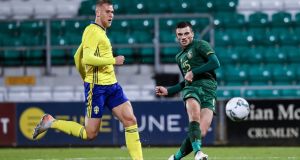 In No Hunger In Paradise, Michael Calvin’s remarkable book about the development of young footballers in Britain, the author puts the statistical probability of an underage player ending up as a pro at 0.012 per cent. The dream of being one of the lucky ones is what sustains large parts of the game, though.

Discard the recreational players and the many who will have already fallen by the wayside, and he cites a study which found that only eight of a sample of 400 players given a professional contract at 18 remained at the highest level by the time of their 22nd birthday.

This is what Ireland has been exporting its best young players to and it is why many have argued down the years that there had to be a better alternative here at home.

Few doubt that if a viable alternative is to exist, then the SSE Airtricity League clubs are the vehicle to provide it and by creating the national underage leagues a few years back, the FAI took an important step towards putting in place the required structures.

Nobody involved, it seems, would claim that we are even close to the point where Troy Parrott or Adam Idah or Aaron Connolly, three recent examples of Irish players who went to England and didn’t get lost in the academy system, would be the players they are now had they stayed.

As with stadiums, substantial investment is required to provide anything like the sort of facilities and related supports put in place by the various English Premier League outfits over the past decade or so.

With just a year to go until the very best young Irish players are prohibited from leaving for England until they are 18, however, there remain deep divisions between clubs and coaches here as to how a system that will shoulder a greater responsibility for producing our future senior internationals can reach the required standards.

The most obvious division as the new senior season is about to kick off relates to the participation by a Shamrock Rovers’ development team in the League of Ireland’s first division. Most of the public controversy around this has centred on threats by other senior clubs to boycott games against the new entity although the association is pushing a compromise that would involve proceeding uninterrupted with this season, pending a wider review.

Behind the scenes, however, other underage clubs are unhappy at the prospect of just one club being in a position to offer the brightest prospects the opportunity to play senior club football while still in their mid-teens. It seems to be widely believed that this has already helped Rovers to recruit players from other clubs.

A key issue within the underage game is the lack of any clear system of compensating clubs for the work they put into developing a player when he transfers.

The movement of players between clubs in schoolboy football here is a huge issue in itself with Shelbourne’s Dave Henderson suggesting that he sees players who are already on their fifth club aged 13 and points out that no parent would think changing school, with all it entails, would be a good idea.

Within the underage national leagues, a study by Dundalk-based primary teacher Tom O’Connor has found that just two of nearly 400 players signed for the under-19 league in 2014 were still at the same clubs at the end of last season.

There are many reasons behind the high levels of movement but it becomes a huge issue for clubs in relation to those regarded as real prospects as they can lose a player they have coached for many seasons and receive nothing, or next to nothing, unless he goes to England and training compensation becomes payable.

“Our underage national league side costs us €100,000 a year,” says Will Clarke of Bray Wanderers/St Joseph’s Boys, “but the players can only be signed on what are effectively 10-month contracts after which they are all free agents. If somebody poaches our three best players, then what’s the point; we would be better off putting that money directly into the first team. Plus, we then have to go and poach some other club’s three best players. The emphasis here has to shift from recruiting players to developing them.”

Even then, the current system, pretty much everyone acknowledges, is far from perfect. The leagues have been a major step forward but in a country the size of Ireland the talent is spread thin and money is short so the two-year jumps between age levels make for significant variations in standard and huge attrition rates as teenagers are recruited and then let go again.

“They are good in the latter part of the season,” says Henderson, “when the best teams come through to play each other but it can be very patchy before that.”

The club has just written to the FAI seeking rule changes with regard to the length of time young players sign for and a reorganisation of the existing structures so that an under-14 league replaces the under-13 one and an under-16 one is created.

The bigger question right now given the Rovers controversy and looming implications of Brexit, though, is how to improve standards and then bridge the gap between the under-19 league and the senior game.

The ban on early movement should mean more players having turned professional by the time they transfer aboard, something that would be expected to involve a fee rather than compensation, something many English clubs have sought to sidestep in one way or another. The players, though, have to be good enough to make the move.

As the stakes become greater, St Patrick’s Athletic, who have been hugely successful in domestic underage competitions, are working towards the establishment of a professional-standard academy while St Joseph’s Boys are exploring the possibility of their under-17 and under-19 teams going full-time.

Stephen McGuinness of the PFAI suggests that at this stage only a small number of clubs have the wherewithal to make those sorts of commitments: “It is only the elite few that can even hope to develop players to the standard you need.”

That, though, is the aim and having stayed at home longer, those who don’t ultimately go away, the theory goes, should be better educated and still well equipped for a career in the league here.

As the new season kicks off, there has never been more riding on that theory being successfully put into practice.

1 Avoid the treadmill at all costs – marathon training in the 2km radius
2 Sonia O’Sullivan: Taming The Tan gave us one last roll of the dice before shutdown
3 ‘NRL Island’ being considered in Australia to continue season
4 Final record attempts before lockdown; underage rugby feeling the effects
5 Rich Premier League clubs way off the mark in cutting staff pay
Real news has value SUBSCRIBE