Bruce says describing Newcastle as lucky this season ‘an insult’ 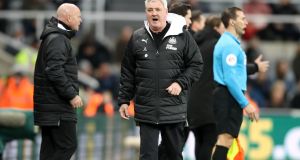 Newcastle United manager Steve Bruce: “The players we’ve got are comfortable in the system we have. It’s the most effective way of keeping this team in the Premier League.” Photograph: Owen Humphreys/PA Wire

Steve Bruce has described the suggestion that Newcastle have been lucky this season as “an insult”, but acknowledged that he dare not risk his team’s Premier League status by experimenting with a less pragmatic approach.

With a debate about his currently mid-table side’s style – or lack of it – raging on Tyneside, Bruce is probably relieved to be travelling to Oxford United for Tuesday’s FA Cup fourth round replay.

Victory would offer Newcastle a trip to West Brom in the fifth round for the first time since 2006, but avoiding an embarrassment against League One opposition at the Kassam Stadium will surely necessitate the visitors summoning up some latterly-elusive creativity.

Some critics believe the safety-first 3-4-3 system Bruce inherited from Rafael Benitez is at the root of the problem, but he is not tempted to deviate from it any time soon.

“I don’t think we’re ready to change,” said Newcastle’s manager, who would, ideally, overhaul his squad in the summer.

“I could change tomorrow and play the way Norwich do quite easily, but I think that if we changed to four at the back we’d be in trouble. The players we’ve got are comfortable in the system we have. It’s the most effective way of keeping this team in the Premier League. It doesn’t really look like ‘my’ team yet, but as soon as I try to open us up a bit we start to struggle.”

Bruce bridles at suggestions that he has enjoyed a fortunate St James’ Park tenure.

“In the past couple of weeks maybe. But I can’t see that our accumulation of points over the past seven months of the Premier League is luck. I think that’s an insult to the players. I really, really do. They might not be the best technically, but they go out and give as much as they can. That’s all you can ask.”

If Newcastle were a little lucky to beat Chelsea before drawing with Everton, Oxford and then Norwich, despite playing poorly in all four instances, Bruce believes fatigue proved a mitigating factor.

He is annoyed that Tuesday night’s game cuts into the supposed winter break but would not scrap replays.

“I think we’ve got to restructure the whole season. Why not start it a week earlier or finish a week later?

“I understand that for a club like Oxford this replay probably means being able to sign a player, but I also understand it’s ludicrous to expect top players to keep going every Tuesday and Saturday. In my humble opinion we should do away with international friendlies.”

He must cope without two international loanees in Danny Rose and Valentino Lazaro at Oxford as neither signed in time for involvement, but hopes to field Matty and Sean Longstaff despite both brothers having currently failed to agree new contacts.

Matty Longstaff is now in the final six months of his deal, and has been watched by both Milan and Internazionale.

“It’s a concern,” said Bruce. “It really is. I hope both Longstaffs get tied up, but the players have the power today. I hope there’s a bit of common sense shown.”