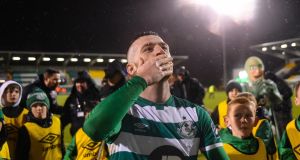 What with the size of the crowd, the setting and the quality of the contest, it must be only a matter of time before one of the many reports into the future of this league recommends that this pair simply take each other on over and over. There were a few moments here when it would haven’t seemed an entirely unattractive idea.

Chief among them were the ones where Jordan Flores and Jack Byrne popped up to score early contenders for goal of the season. Safe to say, there was something for pretty much everyone amongst the crowd of 7,522 to enjoy over the course of the evening. Byrne will have a better idea in a couple of weeks just how well Mick McCarthy enjoyed his night out although the Ireland manager seemed to have departed by the time the Rovers midfielder fired home his winner seven minutes from time.

The volleyed equaliser by Flores was the first of a couple of hefty blows by the title holders to their hosts but Rovers showed enormous character here first to come back from behind, then to push on and win it.

Dundalk had dominated the encounters between the two sides last season, taking 10 points from 12; a key component of their 11 point lead at the league’s conclusion and it is hard to avoid the conclusion here that both the Rovers win and the manner in which it was achieved, represent substantial statements of intent by Stephen Bradley’s side.

The Rovers boss had reverted to much the same side that overran Cork last week although Graham Burke, who scored five that night, was one of two absent players and having returned, Joey O’Brien limped out of this one with a hamstring injury picked up in the very early stages. Rory Gaffney had arrived during the intervening week but started on the bench.

Dylan Watts released Aaron Greene barely 17 minutes in and the striker, having completed an elaborate shift of body position so as to take his shot with his left foot, curled the ball a foot wide of the far post.

Having played his way into the side with his performance in Waterford, Watts shone again here for the best part of an hour and even showed Greene up on the finishing front by scoring a couple of minutes after his team mate’s miss.

Byrne had a hand in the move early on before Ronan Finn sent in a low cross from the right and when Watts’s initial attempt at a flick to the far left corner was blocked by Sean Hoare, his reward for reacting first to the loose ball was a virtually open goal.

The South stand crowd loved it but the celebrations were almost cut short by Dundalk’s equaliser which you would like to think the support at least admired, however grudgingly. The visitors got themselves a corner out on the right and after Michael Duffy floated it in, Flores met it first time with a superb left footed volley that Alan Mannus got a hand to but simply couldn’t keep out.

It must have been a deflating moment for the Dubliners but they still had just about the better of things overall.

Byrne actually seemed relatively subdued at times and though they battled hard and moved the ball about well in midfield, carving out clearcut chances proved an issue for the locals.

Converting them proved to be again too. This time Gaffney, having got on in the second half, crossed for Greene whose header was cleared off the line by Andy Boyle. Down the other end Pat Hoban showed them all how it should be done with a cheeky finish after a Byrne pass had been blocked down by Gregg Sloggett and Daniel Kelly played the striker in wonderfully.

That, you suspect, might have been that last year but this time Roberto Lopes headed Rovers back level from a Byrne corner and then the midfielder really made his mark with the winner; a shot from distance that followed a neat turn after Aaron McEneff had provided the pass.

The champions’ pursuit of the game’s third equaliser in injury time made for additional thrills and produced just a little acrimony too but the home side held on and it was their fans who went home happy. Very, very happy indeed.