Football fan survey: Almost half of Irish adults say they support a club

Some 40,000 Irish people travel on a “regular” basis to see football in England 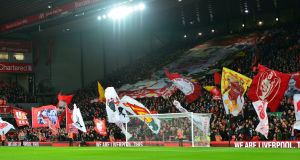 Many Irish Liverpool fans are familiar with the atmosphere and colour of the Kop at Anfield on match days. Photograph: Richard Martin-Roberts/CameraSport via Getty Images

Almost half of Irish adults say they “support” a football club with close to two -thirds of those listing Manchester United or Liverpool as the team they take an interest in, according to a survey conducted for An Atlas of Irish Sport, a book to be published over the coming months by Cork University Press.

Most clubs from the Premier League feature in the findings but the enormous popularity in Ireland of Liverpool and United, who have 38 English titles between them, is confirmed by the survey, in which 1,033 Irish adults were asked about the nature of their interest in clubs here and abroad.

Manchester United come out narrowly on top overall with Liverpool next and Celtic a distant third. All told, just over 46 per cent of those asked said they supported a club with just over 40 per cent naming a Premier League outfit, compared to 12.5 per cent for the Airtricity League. Respondents were allowed name more than one club and there is significant overlap between Irish, English and other clubs.

For the top two, high levels of support were a constant across ages and geographical areas with Liverpool claiming top spot in a couple of demographics but no other club seriously challenging the pair’s general dominance.

Cork City do tie with Liverpool on 10 per cent for second place in Munster while Celtic are joint-top with United among 55 to 64-year-olds. The wider pattern is clear cut, however.

The presence of not just Barcelona but also Juventus and Bayern Munich in the 20 most mentioned clubs may be evidence of the growing awareness among Irish supporters of the European game but there is what appears to be potentially alarming news for the Scottish champions, who have long attracted significant levels of support from this country.

Among those aged over 35, Celtic continue to enjoy substantial backing here, comfortably more than any team outside of the top two. When it comes to 18 to 24-year-olds, however, the Scottish side are faring far less well with just one per cent describing themselves as fans of club, a figure eclipsed by the six per cent who mention Lionel Messi’s Barcelona.

Liking a particular player (or players) is the reason most often cited for choosing a team narrowly ahead of friends supporting the same club, which was successful at the time the person was making a choice and a parent supporting the club. All featured prominently, though.

Having actually lived in a club’s catchment area or had a family/historical link to it was a key factor for far fewer people.

Most of the clubs that feature are based in British cities that attracted large numbers of Irish immigrants, something that seems to be a factor in the findings.

Arsenal, for instance, point to the number of Irish labourers employed in the armaments industry in Woolwich as a source of support for the club in its earliest years, something later reinforced by those who left Ireland in the 1950s and 60s.

The club is generally accepted to have then enjoyed a surge in support among people still living in Ireland during the late 1970s when the team included prominent Republic of Ireland internationals Liam Brady, Dave O’Leary and Frank Stapleton. Quite a few clubs can point to similar sorts of connections.

Asked about the extent of their support for their favourite team, many respondents said it is largely limited to looking out for results or watching games on television but almost a third (32 per cent) say they occasionally attend games and three per cent say they are season ticket holders or very regularly go to matches.

That figure rose to eight per cent among League of Ireland supporters but in terms of Premier League supporters, it was also three per cent, something that would equate to some 40,000 Irish people travelling on what they consider to be a “regular” basis to see football in England.

Most are men with almost twice exactly as many males as females describing themselves as supporters (62 per cent compared to 31 per cent). Among those women who do, though, Manchester United and Liverpool fare particularly well with 35 per cent and 32 per cent support respectively.

Broadly speaking, however, support levels for the various different clubs tend not to be a million miles apart between the genders. More than 40 per cent of men describe the results of their favourite team as important, very important or central to their life. The corresponding figure for women is 16 per cent.

Among those who do identify as supporters, twice as many women as men, 29 per cent as compared with 15 per cent, says that supporting a team “just gives them an interest in the game”.