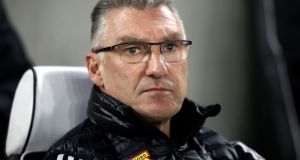 Go back to the first of Leicester City’s miracle seasons in the middle of the last decade and observe the Premier League table with 11 games remaining. Leicester were bottom on 18 points, seven off safety after losing five of the previous six matches. Seemingly, they were without hope.

Thanks to results above them, they were still seven points off safety but now there were only nine games left. Still, Leicester’s manager at the time, Nigel Pearson, said at White Hart Lane that it was not over. He’d looked at the table and the fixtures and he knew six of those last nine were at home. Pearson did not call the table a liar but he suggested it was being economical with the truth.

Leicester won their next game – at home to West Ham – via an 86th minute Andy King winner. Seven days later, they went to neighbours West Brom and won 3-2 with Jamie Vardy scoring in injury-time, uproariously.

The table showed Leicester remained bottom, but the gap to safety was now just three points.

One week on, Leicester defeated Swansea 2-0 to jump two places and suddenly only goal difference kept them from another Premier League season.

We know the rest: Leicester won a fourth consecutive game at Burnley and by the season’s end they were 14th, well clear of relegated Hull, Burnley and QPR. Hull had been 15th with 11 games to go.

Fast forward to 2020 and with 11 games to go of this Premier League season Watford have 24 points, have lost three of their last four and sit second-bottom. There is an echo of Leicester in these statistics and also, of course, in the fact that since early December Watford’s manager just happens to be Nigel Pearson. As he will note, for all the superficial angst of their situation, crucially, Watford are just one point from safety.

Pearson will also have surveyed the remaining games and made a case in his head that six of them could be won – or offer the opportunity to be won. There are four where he would give his players a chance of a point and then there is this evening – Liverpool at Vicarage Road.

Given Liverpool are 65 points ahead and have scored 40 more goals than their hosts, this would appear to be a damage limitation exercise for Pearson. Liverpool, we keep needing to remind ourselves, have not lost in the league since January of last year. They also defeated Watford in December 2-0 at Anfield. Pearson could be forgiven for prioritising next Saturday at Crystal Palace.

But there is something about Watford and something about Pearson that makes you think not only will they have enough to survive this season, they could make it uncomfortable for Jürgen Klopp on Saturday. Where Watford are concerned, the table needs a correction.

Had Troy Deeney shown his usual composure last Sunday at Old Trafford, Watford would have been one up before everyone started going overboard about Bruno Fernandes.

This may sound like a shoe-horning of potential drama into what should be a routine away win for Klopp’s men, and it is slightly underwhelming for Liverpool that in this, their historic season back as England’s champions, there is a lack of week-to-week giddiness (from neutrals) about this campaign.

As this is due to Liverpool’s consistent excellence, however, their fans are hardly complaining. Each week is a step closer for them.

But there is no absence of intrigue at the other end of the table. There the relegation zone stretches from Watford to Southampton, from 19th to 12th.

Only Norwich look certain to drop but seven points separate the six teams above the Canaries and it would be a brave chairman at any of those clubs who is planning for next season in the Premier League.

Southampton and Palace should be able to achieve that and if Newcastle overcome Burnley, they should too – though few of their fans will turn up confident.

Newcastle have still to play four of those below them and one of them is Brighton, whose run-in, on paper, is tougher. Bournemouth’s looks harder still – their last five away games are at Liverpool, Wolves, Man United, Man City and Everton.

Aston Villa, immediately above the relegation zone, have a League Cup final this weekend, followed by a trip to Leicester. They have yet to go to Liverpool and Everton before a last-day match at West Ham.

That could be very claret and blue if the Hammers are still sweating. Without a league win since New Year’s Day, West Ham host Southampton today and then have three London derbies at Arsenal, Tottenham and home to Chelsea. In between, Wolves visit.

So West Ham could well be sweating come May 17th – and Villa and Bournemouth. This mug punter says Watford and Pearson will be planning for next season’s Premier League by then.

VAR continues to confound and annoy

Last Saturday afternoon, at Stamford Bridge and Turf Moor, VAR reached an absurd level of incompetence. It was another bad day for the system and more worryingly, for English football.

Was VAR not introduced to correct glaring sporting injustices such as Thierry Henry’s handball in Paris in 2009 and Frank Lampard’s over-the-line goal for England in South Africa at the World Cup a year later?

Now it’s being used by officials who made these errors in the first place to correct fresh mistakes by their colleagues. Or not.

The missed Stamford Bridge stamp and the Bournemouth shoulder at Burnley were stunning failures of recognition and interpretation by the officials.

Even worse, though receiving a fraction of the attention, was the assault by Manchester City keeper Ederson on Leicester striker Kelechi Iheanacho.

Iheanacho, bravely and with his eyes on the ball, ran onto James Maddison’s cross and headed the ball just as Ederson, not bravely, not with his eyes solely on the ball, smacked him with his fists. It was a foul, a penalty and a displayed a degree of recklessness that should have brought a red card.

What happened? Nothing. Goalkeepers are different, it seems.

Iheanacho had to leave the game due to the concussion protocol, Ederson played on and everyone got exercised by a possible handball by Kevin De Bruyne.

Imagine if it had been the other way round and Iheanacho had caught Ederson late?