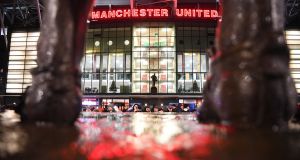 Pat Dawson of Cork-based Dawson Travel was one of the first to get involved in the business after being asked to source tickets for Old Trafford by a bank’s social club. File photograph: Clive Mason/Getty Images

Irish players may find it harder to get a look-in at the wealthiest English clubs these days, but supporters from this country still top the Premier League numbers table, according to tourism authority VisitBritain.

Research published in September 2015 suggested that, of 800,000 visits from overseas to Britain that included a football match, 121,000 were made by Irish people, a figure that comfortably leaves Norway’s 93,000 in second place. It is all very big business both for the clubs and the country.

The spend is not broken down by country, and Ireland’s almost certainly falls well short of the average – if it did not then trips by Irish people that included games would have been worth €125 million to the British economy that year – but there are, according to Pat Dawson of Cork-based Dawson Travel, “five or six agencies here doing Premier League travel in a serious way plus an awful lot of independent travellers.”

Dawson was one of the first to get involved in the business after being asked to source tickets for Old Trafford by a bank’s social club. The sale fell through and he had to hurriedly place an ad in the Evening Echo to offload the tickets. “They all sold out in a day or two,” he remembers, “and I thought to myself, ‘there’s something in this.’”

Football was, he says, a “huge” part of the business through the 1990s, and the firm was bringing so many people to Manchester United that he became “semi-friendly” with Alex Ferguson. The company is still one of those arranging trips for people, and Dawson says that many people find a travel company’s “expertise worth paying for”, not least those “like daddies and mammies who want to give a child a memorable trip or somebody buying a present for a 40th or a voucher.”

He says the clubs, however, have altered their business model and raised their prices, with agencies often obliged to buy corporate level tickets at a time when independent travel has become a great deal easier.

Dawson talks of the difficulties with booking travel to games (many agencies do not include it in basic packages) and suggests that “as soon as the fixtures are confirmed, the airlines have their numbers crunched and, after that, talk of cheap flights is a joke”.

John Holmes, a long-time Liverpool supporter and seasoned veteran of the Anfield daytrip, reckons you have about a half an hour after Sky announces changes before the likes of Ryanair catch up.

“Sky always seem to announce the changes first and if you can get in straight away you can still get reasonable flights,” says the Dubliner, who grew up going to Shamrock Rovers on Sunday afternoons but is now a season ticketholder with the Premier League champions-elect.

Like many Irish fans in his position, Holmes displays a knowledge of route permutations that would do most travel agents proud. A handful of airlines are mentioned – though one tends to be predominant in his planning – and at least five airports, after which a mix of trains, buses and taxis are employed.

For the forthcoming Champions League game against Atlético Madrid, his 8am flight to Leeds cost €15, a bus to Dyer Street station from the airport will cost £3.80, then he’ll pay £4 for a National Express to Liverpool. After the game, a shared taxi to the local airport will be a fiver a head, and the flight home is €60 – although he is just a little put out that this came down to a tenner at one stage after he had purchased due to uncertainty over ticket allocations.

All told, he reckons, he attends more than 20 games a season for less than “maybe four or five grand”, although that figure includes the cost of bringing family members to quite a few games as well as the odd Champions League final.

“It’s reasonable,” he says with a grin, “because I don’t smoke, I only have the odd drink and I have to do something for a bit of entertainment.”

1 Ken Early: Why international football is fading into obscurity
2 Royal Portrush: Golf clubs ‘in real distress’ as eyes turn to 2021
3 Colin Kaepernick’s exile is too fresh for NFL to speak out on US protests
4 Rugby Australia slashes one-third of staff in restructure
5 Louise Galvin’s rugby career on hold for work on the frontline
Real news has value SUBSCRIBE