Aston Villa’s Irish brigade: Tangled up in claret and blue 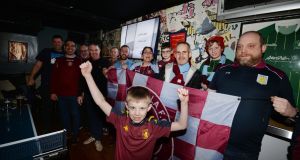 Asked to explain how the so many people in the Ghanaian town of Juaben came to support Aston Villa, the chair of the local supporters’ club, Owusu Boakye Amando, says his grandfather told him once that aside from the one heaven there was a god in football too and that god’s name was . . . Paul McGrath.

If Paul McGrath can turn a small town in west Africa claret and blue, though, imagine the impact in the Ireland of the 1990s when he and three other Irish internationals played at the club in the seasons that followed the Italia ’90 World Cup.

You can witness it for yourself by heading along to Buskers in Dublin’s Temple Bar on Sunday when a couple of hundred of the club’s fans – many of them in just the right age bracket – are expected to watch this weekend’s League Cup final at the base of the Leinster Lions, the world’s biggest Aston Villa supporters’ club.

The club’s support here may be dwarfed by Manchester and Liverpool, with just 2 per cent of those who say they support a club mentioning Villa, but there are common themes to the way those who do came to make their choice.

“They generally seem to come in waves,” says Limerick-based Paddy Kelly, former chair of the branch, who completed a work-related free transfer to the Munster Lions, which he now chairs, a few seasons back. “There are a lot of fans my age (43) from when all of the Irish players were there,” he says. “Then there’s another group that goes back further, back to when they won the European Cup (1982). Beyond that, they won the FA Cup in 1957 and there are a few lads in the Irish Lions and that would be their first memory.”

Kelly will be Wembley this weekend with his wife Barbara, and kids Stephen and Robyn. His son, he admits, “never had a chance” of not being a Villa supporter and the name, in case you are wondering, is definitely not a coincidence. “I was a Liverpool supporter but Steve Staunton left in 1991 when I would have been 14 or 15,” he recalls. “My neighbour was a Villa fan; he was thrilled and I was devastated.

“They played a friendly here against Shelbourne not long after, I went along and I was hooked. Although the deal was completely sealed a while after that when his father, also Paddy, took to Villa Park for the first time. He wrote to Staunton and asked if we could meet him and he left tickets for us at reception for the players’ lounge. There was no way back for me after that.”

Having grown up near Tolka Park, he brings Stephen to see Shelbourne whenever possible and says a fair few of the Cork-based Villa supporters follow City too. “I’m very interested in the league here and I think there’s a place for both.”

He is a Villa season ticket holder, though, and gets over to most home games. “I try to use the weekends for Villa and the midweeks for Ireland,” he says, just when it seemed he might have been doing enough by way of travel.“It’s an expensive hobby to have,” he admits, “but we are both blessed in that we have good jobs so we still get away on good holidays. I don’t have any other vices. I don’t drink too much, I don’t smoke.”

Kevin O’Dowd says much the same really when asked about his own expenditure on travelling back and forth to Birmingham. His support for the club is also rooted in those Irish-flavoured early 1990s, although in his case there had been a Kevin Sheedy-inspired flirtation with Everton before he settled on Villa. Things escalated steadily once he did.

“I went to my first game in ’99 and by the mid-noughties I’d say I was going to 15 or 16 games a season. Then, when Martin O’Neill came in, in 2006, and the club was suddenly going for the Champions League I bought a season ticket.”

Somewhere along the line he started going to the away games too and over the last three seasons he has averaged around 50 games. At the same time, he made it his business to get along to all of the English league grounds Villa games hadn’t already brought him to – there were only about 20. He admits to having a “slightly obsessive nature”.

His wife Laura is “very understanding”, he says.

“It used to be the cause of a few issues when we weren’t living together because weekends would be the time that you would normally see your girlfriend, but we don’t have children and so she has one day now to chill out and do her own thing. In the summer, she sometimes asks do I not have a pre-season friendly to go to.”

That sort of understanding seems pretty common among supporters who follow an English club to these lengths, but then they would have to be really.

Kelly’s successor back at the Leinster Lions, Philip Drew, also speaks warmly of the understanding he has with wife Alison. “She knows it’s my second passion,” he says. “She isn’t that much of a sports fan but that’s fine. It works well. I’m not into some of the things she is into.”

Drew was born in Birmingham but came to Dublin as a child when his father’s work prompted the family move. “To be honest, it started out as a question of roots,” he says, of his own, very deliberate decision, to follow Villa from an early age, “but it has grown from there.”

He doesn’t travel as much as the others – perhaps half a dozen games a year on average – but he puts a few hours a week into the supporters’ club which acts as a focus for fans living in or visiting Dublin. There are gatherings for every game while it also acts as part of the club’s ticket distribution system, with anything up to 40 members heading over to a single game.

His eldest son, Benjamin, has just turned 14. “He has moderate to severe autism,” Drew says, “and is in residential care but he still follows somehow.” Eleven year-old Nathan, meanwhile, is, much to the obvious delight of his father, a very avid fan – a regular at weekends in Buskers, where there is food and entertainment for the kids around afternoon games, he also occasionally travels to games with his Dad.

Buskers is a busy place on the Saturday afternoon The Irish Times visits. A subdued cluster of Villa fans are watching their side lose to Southampton who lead from early on thanks to a Shane Long goal. When Drew complains that “he always scores against us”, it seems like just the sort of far-fetched claim a fan who is hurting might be expected to make but oddly it turns out to have some basis in fact. Insofar as the Irish striker always scores against anyone, it does indeed seem to be Villa.

The atmosphere is dominated by the overly loud commentary for a rugby match being shown on other screens while in another corner a smaller group of Barcelona fans seem to be having rather more fun watching Barcelona beat Eibar 5-0, largely thanks to four goals from Lionel Messi.

Many of Nathan’s friends support more successful teams but few can claim to have seen them anywhere near as many times in the flesh, whether in play-off games at Wembley or at home in the Premier League. “His eyes always light up when he is coming up towards the stadium and you see it rearing up. The night before he finds it hard to sleep,” says his father.

The Irish connection still matters to them both. Drew recalls Shay Given being almost heroic in his dealings with the club’s Irish fans during his time there and in the specially cordoned off section of the car park the players must navigate to get into the ground on matchdays, he says Glenn Whelan was always good for a chat when he saw an “Irish Lions” top.

Conor Hourihane, he says, is “nice” but “quite quiet” by comparison. “He has a massive Cork accent on him,” he adds with a laugh, “I don’t know how the African lads manage with him.”

They probably love him – though maybe not as much as that Ghanain village loved Paul McGrath.