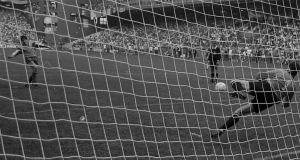 It was a dark, dismal little bar at the foot of the Jiul Valley, in the heart of Transylvania, ringed by Soviet-era flat complexes and in the shadow of the broken timber legs of Petrosani’s abandoned colliery towers. The name of the joint was above the door. It was called Penalty.

It was the middle of a weekday afternoon. Inside, the atmosphere was dead, except for the sound of Shakin’ Stephens singing You Drive Me Crazy and failing to read the room. Daniel Timofte, the landlord, was sitting alone in a corner, sucking on a bottle of Bergenbier. He looked at least a decade older than his 34 years, his portly figure and bloated face a legacy of the horrific knee injury that ended his career two years earlier.

His greeting was warm. “Danny,” he said with smile. He ordered one of the lounge staff to pull the plug on the jukebox because a man had come all the way from Ireland to speak to him. Yes, of course, he said, he was happy to talk about Italia 90, but he gave the impression that this hadn’t always been the case. Missing Romania’s fifth penalty against Ireland was the defining act of his career, just as saving it had been the defining act of Packie Bonner’s.

It was April of 2002 and he was glad to hear that Bonner was about to return to the World Cup, this time as Ireland’s goalkeeping coach.

“I made that man famous,” he said.

He wasn’t wrong. The photograph of Bonner, diving low to his right to palm away Timofte’s weak effort, might be the most familiar image in the history of Irish sport. But there’s no room in the frame for the man on the other end of the transaction – the villain to Bonner’s hero. The man who missed.

It was a terrible penalty, he agreed – after a short run-up, he struck the ball without conviction or any apparent forethought about where he wanted it to go. He remembered pulling his hair during the long walk back to the centre circle, where he watched through his fingers as David O’Leary applied the coup de grace to Romania’s World Cup hopes.

“I felt like the whole world had come down on my head,” he said. “I let down my team, my country, my people. The other players, they’re saying to me not to worry, that anyone can miss a penalty. They say, ‘We don’t blame you.’ But I can’t look at my friends in the eyes, so that night I stayed alone.”

A week later, a quarter-of-a-million people crammed themselves into Dublin City Centre to welcome home the Ireland team after their quarter-final defeat by Italy. Timofte’s return home to Bucharest was markedly different. He remembered walking through airport arrivals with his head bowed like a man at the centre of a scandal.

“There were lots of cameras there. Flashes in my face. And every reporter wanted to ask me how it was that I missed the penalty? What happened? I did one little interview for television and it was very difficult. The same question over and over. So, after that, I didn’t speak about it for a long time.”

He became a figure of fun for a while. Whenever he played for Dynamo Bucharest, opposition fans – and some of his own – used it to bait him. “Hey, Timofte,” he’d hear them shout, “you f**king missed, you idiot!”

Strangers would ring his home phone at all hours of the day and night and ask, “Why did you miss?” Instead of hanging up, he would allow himself to be drawn into long, philosophical arguments. “I said to them what the other players had said to me. Everyone can miss. It was normal. Maradona missed [for Argentina against Yugoslavia in the quarter-final]. Baggio missed in the final in America [in 1994]. In Italy, I was that player.”

A year later, when Bayer Uerdingen offered him the chance to play in the second division of the Bundesliga, he was only too happy to get out of Romania for a year.

In time, he learned to live with being the man who missed by deciding to own it. When he sank the money he made in Germany into a pub in his hometown of Petrosani, it didn’t take him long to decide what to call it. “When you say ‘Timofte’ to anyone in Romania,” he explained, “they will instantly say, ‘Penalty!’”

We took a walk then. He wanted to show me Jiul Petrosani, the club where he started his career while studying to be an electrical engineer and where he was now taking his first steps into management as the club’s assistant coach.

The stadium was big enough to accommodate 40,000 people. But Petrosani had experienced a massive population decline since the overthrow of Nicolae Ceaucescu and the death of the coal industry. Now, the club drew crowds of 4,000 and two years earlier had sold their star defender for two tonnes of pork. But he was happy with how his life had turned out. “My father spent 32 years down the mines,” he said “and he told me you are mad if you end up like me.”

His knee was sore from the walk, so we sat in the dugout and I handed him a gift I’d brought from Ireland. It was a copy of The Van by Roddy Doyle. I told him it was a novel about two unemployed Dublin men who open a chip van during the World Cup summer of 1990 and there was a great set-piece in it surrounding the Ireland v Romania match. He wanted to hear it, so he asked one of the club’s youth team players, who had excellent English, to translate while I read it for him:

“He has rosary beads in his bag, yeh know,” said some wanker.

“They’ll be round his fuckin’ neck if he misses this one,” said Jimmy Sr.

No one laughed. No one did anything.

Packie dived to the left; he dived and he saved the fuckin’ thing.

The screen disappeared as the whole pub jumped. All Jimmy Sr could see was backs and flags and dunphies. He looked for Bimbo, and got his arms around him. They watched the penno again in slow motion. The best part was the way Packie got up and jumped in the air. He seemed to stay in mid-air for ages. They cheered all over again.

He listened intently as the youth team player translated the entire story. He did so at length, taking twice as long to tell it as Roddy Doyle did. When he was finished, I expected Timofte to laugh. But he didn’t. He just nodded.