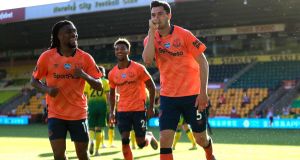 Greater escapes have happened. Teams have pulled back from grimmer positions than this. Two factors continue to play in Norwich’s hands, that their run-in is – relatively – gentle and that three of the other strugglers have returned from shutdown with the haunted look of the doomed. But still, after the great reset, if you were planning to stay up you probably wouldn’t start this final quarter of the season with a pair of home defeats to Southampton and Everton.

All teams will have their tales of woe, their theories as to how they were the ones who really suffered from lockdown and the absence of fans, but Norwich’s perhaps rings truer than most. All five of their scheduled home games by the time of the restart were against teams currently in the bottom half of the table; the loss of home advantage perhaps has afflicted them more than most.

It’s hard to claim a 3-0 defeat to Southampton would have been different with fans but this might have been. Drab games have sputtered along in front of the most passionate crowds, but this was one of those matches that felt like it needed something, anything, to shake it from its drift.

There was an inevitability to the way it played out. Everton, as they had against Liverpool on Sunday, kept it tight early – although with the added width of Bernard – and then, having gained a foothold, slowly began to open out.

The goal came 10 minutes into the second half and, from a Norwich point of view was largely self-inflicted. Lucas Digne slung in a corner from the right and Michael Keane, with nothing more than a simple run to the front post, found space between Kenny McLean and Timm Klose to glance in.

After fielding a front two for the first time in his three years at the club against Southampton, Daniel Farke reverted to his 4-2-3-1. In part that was because the 4-4-2 had been a plan to bypass Southampton’s press, but it was also indicative of Teemu Pukki’s struggles. The Finland international has not scored from open play this year, and has never really recaptured his form since breaking a toe in the draw against Leicester in mid-December.

This was the first time he had started a league game on the bench since joining Norwich from Brondby in 2018, although he was introduced along with the lively Emiliano Buendía with 19 minutes remaining.

But Norwich remained blunt. Onel Hernández, whose wobbles in from the left caused occasional problems, did clip the post with a deflected shot and Jordan Pickford had to beat away a Lukas Rupp effort just before half-time, but that was as close as Norwich came.

There has been an argument, especially among Norwich fans, that they have been rather better than results have suggested but a run of one goal in seven league games exposes the poverty of their creative play. The Slovakia international Ondrej Duda, brought in on loan from Hamburg in January, was supposed to add some spark from a central role behind the striker, but he is yet to record either a goal or an assist. The free-kick that he clubbed into the wall from a promising position just after the half hour felt emblematic.

With none of the other four major relegation candidates looking like mounting a surge, the situation is far from hopeless for Norwich, and there is still the Cup quarter-final against Manchester United on Saturday.

The worry of this game was how flat everything seemed, how devoid they were of threat even as Farke threw on attacking player after attacking player late on. They will face less defensively assured sides than Carlo Ancelotti’s Everton but one shot on target in the entire game tells its own story. This last week was an opportunity for Norwich to bridge the gap towards safety but, two games in, the first pile is yet to be laid. – Guardian