Ireland international midfielder to end four-year stay with the Clarets 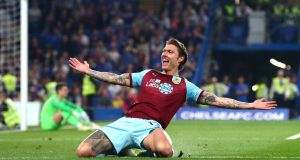 Ireland international midfielder Jeff Hendrick will be on the lookout for a new club for next season after failing to agree a new deal at Burnley.

The 28-year-old Dubliner was one of four first-team squad members whose contracts were due to run out on June 30th and who would not have been able to complete the current extended season.

Signed from Derby County for a club record £10.5-million on a three-year deal in 2016, Hendrick made 122 appearances over four seasons, scoring nine goals.

Burnley boss Sean Dyche also confirmed that England internationals Joe Hart and Aaron Lennon, who are both 33, will also leave the club when the season ends.

Full back Phil Bardsley, 34, has signed a contract extension to keep him at Turf Moor until the end of next season.

The contract situation and injuries meant Burnley manager Dyche could only name seven of the possible nine substitutes on the bench for Monday’s 5-0 defeat at Manchester City and he included two goalkeepers.

Dyche, whose side are 11th with 39 points from 30 games and host strugglers Watford in their next game on Thursday, had been critical of Burnley’s directors for failing to act on his contract advice but played down the significance of that.

“There are certain ways that we work here that are difficult. It usually revolves around finance. I know the financial standing of the club and I know how good it is, which is why it is tough sometimes,” added Dyche.