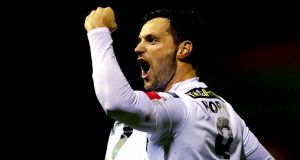 Tolka Park may not exactly be the Premier Division’s grandest stage these days but Shelbourne marked the return of top-flight football to the place with a performance that will reassure their supporters about the campaign to come despite Dundalk getting to head for home with all three points.

Ian Morris had said beforehand his team would try to win the game and starting with a second striker against the champions seemed a bold enough way to back-up the statement of intent.

Neither saw much of the ball through the opening half to be fair and much more important was the commitment his players showed over the course of the night, initially in terms of preventing their visitors settling into any sort of attacking stride.

Gary Deegan led by example but had been booked for his trouble within a quarter of an hour, something that restricted his input on that front for the rest of the game.

In terms of preventing the creation of chances from play the collective effort was all pretty effective, but set pieces proved to be far more of a problem and Morris’s men had conceded from two before the break, by which time the suspicion was they were already dead and buried.

The manager is bound to have been disappointed with both. Dane Massey’s flick to Michael Duffy’s corner 19 minutes in may have thrown the Shelbourne players on the near post but the ball was allowed to bobble all the way to the far one before Andy Boyle put an end to all the uncertainty.

Duffy also got things rolling for the second, lofting in a high free given for a foul by Jaze Kabia on Massey. The wind didn’t help the home side’s defence but they still didn’t do themselves any favours either and Pat Hoban stepped up to head beyond Jack Brady from a few yards out.

Given the conditions, Dundalk were never going to exactly coast through the rest of the night but Shelbourne did seem beaten as they wandered in for the interval.

To their credit, they came back looking determined to give the comeback a proper go. Within a matter of minutes they were screaming for a penalty amid claims of a handball, however intentional, and though all they got was a corner Deegan then scored a bit of a screamer from just outside the area after it had only been partially cleared.

For a while after that, there seemed to be so much energy around the place that anything might be possible. But the home side ran out of steam slightly though the middle of the second period and Dundalk, more than once, went close to getting the game’s fourth goal.

It wouldn’t come, though, and while there was just the one in it, Shelbourne refused to accept that there wasn’t something in it for them. But for Gary Rogers coming quickly off his line nine minutes from time, Karl Sheppard might have had them level after getting on the end of another ball over the top and Chris Shields had to make a terrific challenge on Kabia to prevent him getting clear in the box after a bad mistake by Seán Hoare.

As their pursuit of a point moved into injury-time, Dundalk were forced to defend deep and with six across the back and Shields sitting just in front of them at times.

It still ended in disappointment for the Dubliners who didn’t quite have enough about them in attack to get the second goal. But Morris had described this as their biggest test of the season and despite the lack of points secured he might well feel they showed enough on this occasion to suggest they will pass enough of their others during the months ahead.