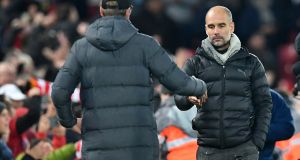 The M-62 motorway between Manchester and Liverpool has always been busy with football gossip about the football houses of those cities. And it is tempting to wonder if Jürgen Klopp’s latest example of effortless charm has reached the offices of Pep Guardiola.

It has been an endless winter for Guardiola, who looked tired on Wednesday night as he vowed passionately to stay and fight with beleaguered Manchester City while issuing some dark advice to the football club where he cultivated his vision for the game. “Don’t talk too loud, Barcelona,” was his message after it was put to him that the president of his former club had voiced his welcome for the Uefa ban imposed on City.

Meanwhile, down the road- Klopp has been happily sending a personal registered post letter in reply to a Co Donegal schoolboy who, as a Manchester United fan, had written to ask him to stop Liverpool winning games as it was making him “sad.” Nothing reflects the strange serenity of Liverpool’s romp towards a first league title in 30 years than the idea of its manager replying to a young fan while his team enjoys a staggering 25-point lead at the top of the Premier league table.

Whoever rooted the letter out from the bags of unsolicited mail that must arrive in Anfield week-in, week-out knew their business. Nothing engages Klopp like the idea of innocent love of the game. In his reply, he spoke to the boy about values of the game and the historical connection between Liverpool and United “because although our clubs are great rivals we also share a great respect for one another.” So much for gods not answering letters. And if Pep happened to read this reply, he might seethe as he silently wondered: ‘And where is the respect for Manchester City?’

Indeed, if you were a paranoid Manchester City fan you could easily interpret Klopp’s letter as some high-level trolling of their suddenly precarious state. And it is easy for City fans to be paranoid just now. As things stand City will not play in the Champions League for the next two seasons. The instant presumption was that Guardiola would pack his wardrobe of sombre designer clothing and his magic book of tactics and take his genius to another club.

But on Wednesday night, as he sat in the press conference room following City’s 2-0 victory over West Ham, there was a glint of anger and stubbornness in Guardiola’s eyes. About the intricacies of Manchester City’s appeal against the Uefa ban for breaching financial fair play rules, he would not be drawn. He pointed out that he is not a lawyer.

The bare facts are that City stand accused of a serious breach of financial fair play by using some £50 million of its owners’ money while disguising it as income from its main sponsor Etihad Airlines. City’s boardroom and legal team are adamant that the findings are flawed. Guardiola said that he trusts his club. Two years out of European football is a whopping punishment. City’s fate will be decided after a protracted and expensive legal appeals process. On the field, City’s best retaliation would be to win this year’s Champions League - to win the thing before the authorities can boot them out.

For lifelong City fans who remember more modest decades, this must be a peculiar moment. Just over a decade ago, Alex Ferguson witheringly dismissed City as “a small club with a small mentality.” He was momentarily piqued that City had managed to sign Carlos Tevez, who had left United. But this was at a time when Ferguson and United were simply imperious.

“All they talk about is Manchester United,” he scoffed. It was a taunt. And even City fans must have felt the sting of truth in it. For decades City were always the less successful and less fashionable club. But they had their dream epochs. They had their songs and Malcolm Allison and Tommy Hutchinson scoring for both teams in that FA Cup final and they had the probably the coolest football shirt in the history of English football. And there was something lovable about them simply because they weren’t United.

Nobody could have foreseen the danger in Ferguson’s remark then. But in the decade since, City have been re-imagined through the billion-pound investment by owner Mansour bin Zayed Al Nahyan, the club’s owner since 2008. The prize recruitment of Guardiola, as the game’s pre-eminent coach, has yielded two league titles and three winters of bewilderingly beautiful football and everything but that elusive, prized European trophy.

City are conscious that they are perceived as nouveau. The subtext to their ban is that Europe’s aristocratic clubs fear them and want to keep suppress them; to punish them for their insolence and newly acquired ambition. There may be some truth in that and there may be truth also that other clubs have been adept at disguising income sources.

The first trophy Guardiola won with City was the League Cup, in February 2018. He wore a yellow ribbon in support of imprisoned Catalan politicians during the match and at his post-match press conference. “Before a manager, I am a human being,” he said. It was then that Rob Harris, a journalist with Associated Press, raised the issue of the questions over the human rights in the UAE, where City owner Sheikh Mansour is deputy prime minister.

Questions like these have been presented as proof of anti-City bias in the media. And it’s easy to understand the annoyance of lifelong City fans whose football experience has been transformed in the last decade. They’ve changed nothing about their habits - they’ve continued to buy the tickets, to sing the songs. Except now their team is winning and thus their manager and fans are invited to feel shame about abstract human rights violations in a distant country.

But the vast majority of media coverage of City’s spell under Guardiola has been positive and complimentary. And one of the prices of becoming an omnipotent club in the biggest sport in the world is that every aspect of that club will come under scrutiny, including its ownership.

So it goes now. There was something jaded about Guardiola on Wednesday. Anyone who watched the slick advertisement-as-documentary on Amazon at least got an insight into the way football rages through Guardiola’s mind. He’s truly obsessed with the game. Pinning himself to a club with a controversial ownership and with complex legal baggage may not be what he had in mind when he arrived in England. And yet here he was, perhaps fuelled with the ambition of besting Klopp in future seasons, declaring his loyalty to a club on which open-season has been declared.

This can’t be what he had in mind after his sensational spells managing Barca and Bayern and when he arrived in Manchester in the general expectation that he would make old England swoon at his vision of the game. And swoon it did. Except that now, there’s a smiley German bloke down the motorway who also has a team playing spellbinding football - and who still finds time to dash off letters to wide-eyed youngsters. Guardiola must be wondering how, if this ban sticks, it will jaundice the outside perception of what he has achieved with City, fairly or not. And if he fails to land the Champions League, has he succeeded anyway?

Suddenly, next week’s Champions League fixture against Real Madrid has acquired an importance that reaches far beyond the immediate reward of a place in the European quarter finals. It is City against the world. But there is one consolation. They’ve proved old Fergie wrong. They’re not talking about Manchester United anymore.