All the latest injury and suspension updates from around the clubs 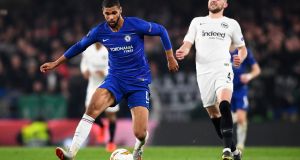 Ruben Loftus-Cheek is in line to make his return for Chelsea against Tottenham on Saturday. Photograph: Clive Mason/Getty Images

Chelsea (4) v Tottenham (5), 12.30 – Live BT Sport
Chelsea midfielder Ruben Loftus-Cheek is poised for his first appearance of the season. The England international will be in the Blues’ squad for the first time this term following Achilles surgery in April. N’Golo Kante will miss out due to a muscular injury that could sideline him for three weeks, while Tammy Abraham faces a late fitness test on his troublesome ankle.

Tottenham have no fresh injury concerns. They are still without a striker as Harry Kane (hamstring) and Son Heung-min (arm) may not play again this season. Moussa Sissoko (knee) is still four weeks away from fitness but Juan Foyth (groin) is in the final stages of rehabilitation.

Burnley (11) v Bournemouth (16)
Burnley striker Chris Wood is facing a battle to be fit. Wood limped out of last weekend’s win at Southampton with a hamstring injury and could join Ashley Barnes (hernia) on the sidelines. Clarets boss Sean Dyche has better news over midfielder Johann Berg Gudmundsson who is fit after a hamstring injury but Matt Lowton (knee) is still definitely out.

Bournemouth will have Jefferson Lerma back in the squad after he missed the recent defeat at Sheffield United through suspension. David Brooks has stepped up his return to first-team action following an ankle injury, although he will not be ready for the trip to Burnley.

Crystal Palace (14) v Newcastle (13)
Crystal Palace should have forward Cenk Tosun and defender Martin Kelly back. On-loan Everton striker Tosun missed the 3-1 defeat at Goodison Park two weeks ago because of a hamstring injury but he would have been ineligible to feature anyway against his parent club. Kelly was ruled out with a calf strain, although both are now fit again. James Tomkins has joined the Eagles injury list with a hamstring issue and Mamadou Sakho is out with the same problem. Jeffrey Schlupp returned to training this week after a lengthy absence with a hip injury but will not feature against the Magpies.

Newcastle striker Joelinton faces a fight to be fit for his side’s trip to south London. The Brazilian is battling to shake off a thigh injury while Christian Atsu is likely to be ruled out due to illness. There is better news for Magpies boss Steve Bruce, with Dwight Gayle and Yoshinori Muto both available again after recovering from recent knocks.

Sheffield United (6) v Brighton (15) – Live on Premier Sports
Sheffield United have returned from their winter break in Dubai with a fully fit squad. David McGoldrick was an unused substitute in the win against Bournemouth on February 9th after a foot injury but the Ireland striker has now fully recovered from the problem. January signings Richairo Zivkovic and Panos Retsos played in a behind-closed-doors friendly this week and will hope to be involved on Saturday.

Brighton manager Graham Potter will assess a number of players ahead of the trip. Dale Stephens, Tariq Lamptey and Alexis Mac Allister will all be looked at before Potter makes a final decision on his matchday squad, although Stephens is expected to miss out.

Southampton (12) v Aston Villa (17)
Southampton full back Kyle Walker-Peters will miss out due to a calf injury, with Yan Valery likely to step in to replace him. Nathan Redmond remains sidelined with a muscular injury, while Sofiane Boufal misses out due to his heel complaint.

Aston Villa will be boosted by the return of Tyrone Mings. The defender missed the home defeat to Tottenham with tonsillitis but he resumed training on Wednesday and he is expected to be restored to the starting line-up by boss Dean Smith. Striker Wesley (knee), midfielder John McGinn (fractured ankle) and goalkeepers Tom Heaton (knee) and Jed Steer (calf) remain out.

Leicester (3) v Manchester City (2), 5.30pm – Live on Sky Sports
Leicester midfielder Wilfred Ndidi will not be ready for Saturday’s clash. Ndidi is struggling with a knee problem – the same one which required surgery in early January – while fellow midfielder Hamza Choudhury is suspended. Recent loan signing Ryan Bennett and Matty James will both come into the reckoning, but Nampalys Mendy (knee) is still out.

Raheem Sterling will play no part for Manchester City. The England winger is making good progress following a hamstring strain and could return to contention for next week’s Champions League clash with Real Madrid. David Silva is also out after being forced out of the midweek win against West Ham with a slight knee problem but Oleksandr Zinchenko is available after suspension.

Manchester United (7) v Watford (19)
Manchester United midfielder Scott McTominay could make his return from injury. Out since St Stephen’s Day with a knee problem, the Scotland international is back in full training and Ole Gunnar Solskjaer says he might be in the squad on Sunday. Mason Greenwood will be checked after missing the midweek Europa League trip to Club Brugge through illness. Axel Tuanzebe and Phil Jones trained ahead of the trip to Belgium but did not make the United squad.

Watford have an almost fully-fit squad after Kiko Femenia and Ismaila Sarr returned to training. Femenia has been out since New Year’s Day with a hamstring injury and Saar has been sidelined for a month. Daryl Janmaat is therefore the only absentee but he too is closing in on a return after a knee injury.

Wolves (8) v Norwich (20)
Wolves have no fresh injury worries. Adama Traore was withdrawn during Thursday’s 4-0 Europa League win over Espanyol as boss Nuno Espirito Santo looks to keep him fresh. Ruben Vinagre remains out with a hamstring injury and is not expected to feature.

Norwich full back Sam Byram has been ruled out for the rest of the season following surgery on the hamstring injury sustained against Liverpool. Centre-back Christoph Zimmermann (hamstring) and winger Onel Hernandez (knee) are both major doubts for the Canaries. Swiss centre-back Timm Klose continues his long-term recovery from a serious knee injury and is close to joining back in with squad training.

Arsenal (10) v Everton (9), 4.30pm – Live on Sky Sports
Arsenal head coach Mikel Arteta has no fresh injury concerns. It remains to be seen if Mesut Özil will return to the squad as he missed Thursday’s Europa League victory in Olympiacos as his wife is close to giving birth, while Lucas Torreira should be available following illness. Pablo Mari is still waiting to make his Gunners debut while fellow new recruit Cedric Soares (knee) remains sidelined – as do Kieran Tierney (shoulder) and Calum Chambers (knee).

Everton midfielder Andre Gomes is available after recovering from a serious ankle injury. Manager Carlo Ancelotti will decide whether Gomes, who has been sidelined since November 3, will start or have to settle for a place on the bench. Fabian Delph is available after serving a one-match ban but Theo Walcott is a doubt.

Liverpool (1) v West Ham (18), 8pm – Live on Sky Sports
Liverpool will be without club captain Jordan Henderson after he suffered a hamstring injury late in Tuesday’s 1-0 Champions League defeat to Atletico Madrid. The England midfielder is expected to be sidelined for three weeks. Xherdan Shaqiri is the only other absentee, with the playmaker not yet ready to return to training following a calf problem.

West Ham defender Ryan Fredericks misses out with a shoulder injury. The full-back damaged ligaments against Manchester City and could be facing a long lay-off. Jack Wilshere (groin) and Andriy Yarmolenko (thigh) are still unavailable.

Health official says decision to hold Liverpool-Atlético game was wrong 19:12
‘There may be no more tennis this year’, says Wimbledon chief Lewis 18:54
Only a matter of time before British Open bites the dust 18:24
Even 60 years on, French rugby tome still holds water 18:00
Son Heung-min to carry out mandatory national service in South Korea 16:39

1 Health official says decision to hold Liverpool-Atlético game was wrong
2 Son Heung-min to carry out mandatory national service in South Korea
3 Avoid the treadmill at all costs – marathon training in the 2km radius
4 Only a matter of time before British Open bites the dust
5 Sonia O’Sullivan: Taming The Tan gave us one last roll of the dice before shutdown
Real news has value SUBSCRIBE