Prolific Lewandowski still at the height of his powers 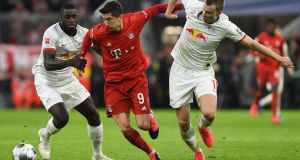 Bayern Munich’s Robert Lewandowski in action against Leipzig. “I still believe that one day we will play in the Champions League final and we will win it.” Photograph: Christop Stache/AFP

Robert Lewandowski smiles as he looks at the iPad.

“I’m very proud of this game,” he says, focusing intently on the screen. The Bayern Munich striker is being shown highlights from one of his greatest performances, the night he scored four goals for Borussia Dortmund in a Champions League semi-final against Real Madrid, and Lewandowski does not need much prompting to explain his finishing masterclass.

It was 24 April 2013 and a wonderful Dortmund side were flying under Jürgen Klopp. Lewandowski has not forgotten the details from that first leg at Westfalenstadion.

“If you score four goals against Real in a semi-final, it is something special,” he says. “You never forget. The best goal? The third – this one.”

Lewandowski points as a wayward shot from Marcel Schmelzer reaches him in the area. He needs three touches: one to control, one to produce a brilliant dragback and one to lift the ball into the top corner without backlift.

“I didn’t have so much space,” he says. “I saw the ball was coming to me. I saw Pepe was coming from the right side, I saw Xabi Alonso coming from the left. But I was so focused on my skills. I didn’t think too much. I just wanted to do what I do best: score.

“You don’t have much time. If you think too long or too much, sometimes that is wrong. If you have one idea and know it from the first minute, do it. Shoot. I had so little space in the box. Think too much, the defender comes to block you.”

Lewandowski scored his fourth goal from the spot, crashing a penalty beyond Diego López, and at that stage it seemed inevitable he would become a European champion one day. Seven years on, though, the Poland forward is still waiting. Lewandowski has not been in a European final since Dortmund’s defeat by Bayern at Wembley in May 2013.

After joining Bayern in 2015 he has moved away from the summit, defeats in three semi-finals and one quarter-final preceding last year’s humbling by Klopp’s Liverpool in the last 16.

While there are murmurs about Bayern being in decline, the Bundesliga champions are in good shape before the first leg of their last-16 tie against Chelsea at Stamford Bridge on Tuesday. They have inched in front of RB Leipzig at the top of the league and belief has returned since Hans Flick was appointed as caretaker manager following November’s sacking of Niko Kovac.

“The players feel more confident because they know what the trainer wants from them,” Lewandowski says.

“The communication is much better. I still believe that one day we will play in the Champions League final and we will win it.”

Lewandowski has a few grey hairs but the player nicknamed The Body looks as lean as ever. The 31-year-old’s sharpness remains intact and he feels fresh physically and mentally. Lewandowski has scored 40 for club and country this season and he is always working on surprising his opponents.

“Now everyone knows a lot about tactics,” he says. “Before the game you cannot say: ‘Today, I try this move’. That’s impossible but if your body knows this movement, this technique, in one perfect moment it’s coming.

“I am doing shooting and sometimes you could think: ‘It doesn’t matter, it’s just training’. But no, if you focus maybe it can be easier in the game. If you have 20 chances in training and score 20 goals during the game maybe you are more likely to score.

“At Dortmund we bet that if I score 10 goals then Jürgen Klopp gives me €50. The first training sessions, I score three or four. Then after five, six, seven sessions I score seven, eight. Then after three months I score every training more like 10. After a few weeks Jürgen said: ‘No more, it’s too much for me. I don’t want to pay you any more’. That was part of my mentality. That was very helpful for me. And good in another way.”

Lewandowski is fascinating on the art of goalscoring. He sees selfishness as a virtue and explains that strikers think differently to other players.

“You can play very well,” he says. “You can make a pass, you make a cross. But if you want to score almost every game, you have to change your mentality. It is not like you change a switch: ‘Okay, now I score’. Maybe 70 per cent is from your head and not your skills. Not everyone can play like a striker.”

Confidence comes into it, training the mind to forget about the missed chances. Lewandowski’s self-belief is impressive and he has looked into psychology. A discussion with one professor revealed something curious about Lewandowski’s pre-match routine.

“Everything you do before the game, the routine is also important to keep the high-level concentration,” he says. “The brain gets the information that something important is coming. He asked what I do. I said: ‘I don’t know, I do a few things’. But before the next game I was more focused. Every time I put the left boot on first.”

There was a time when the traditional No 9 seemed to be out of fashion. When Pep Guardiola was at Bayern people wondered whether he would take to Lewandowski, whose response was to score five goals in nine minutes against Wolfsburg in September 2015. The relationship flourished and Lewandowski thinks the Manchester City manager made him a more intelligent player.

“When Pep came to Bayern Munich people thought that we would be playing without a No 9,” Lewandowski says. “For me, that was like: ‘Maybe I should try to play in another style’.

“I learned a lot from Pep. We spoke a lot about tactics and for me that was something new. I knew that if I could play for Guardiola with his mind and his ideas – about tactics, about strikers – that it would be good for me. In modern football it’s very difficult to play without a striker. I’ve not seen that for a few years.”

Lewandowski praises Guardiola’s tactical vision and Klopp’s man-management. “They are different trainers but if you make a mix from both it would be perfection,” he says.

He marvels at Liverpool – “a machine” – and talks about how Klopp changed him as a person. “He is an amazing guy. It doesn’t matter what he says: you believe him. Everything is from the heart.

“Before I had a lot of problems with my body language – being more a part of the game and training. My body language was the same. Sometimes you have to be more angry. For me that was never going to happen.”

He makes a monotonous noise and moves his hand in a straight line.

“I had to change. That was under Klopp. He told me sometimes he didn’t know if I was angry or happy. Nobody likes changing something in yourself. That was not easy. But I knew if I wanted to be a better player and to move to the next step in my career I had to start.”

Lewandowski almost linked up with another managerial great in 2012.

“Sir Alex Ferguson,” he says. “I was speaking with him after two years at Dortmund and at that time I was really thinking about a move to Manchester United. Because of Ferguson and because of Manchester United. Borussia Dortmund said: ‘No, that’s that’. That was the first time I was thinking about the move because if you get a phone call from Sir Alex Ferguson, for a young player it was something amazing. That was a special day for me.”

Speculation about joining Madrid has died down. Lewandowski is settled at Bayern but he is still looking to add extra layers to his game.

“I want to play for a long time,” he says. “I don’t feel 31 years old and everything I am doing now is working to keep me in top [shape] for the next five, six years. I don’t want to be a striker who spends 90 minutes in the box waiting for the ball. I don’t like just getting the ball 10 times during a game. It’s not enough for me; I find those games difficult.

“Sometimes you have to be there waiting for the ball and if you get it once in the 90 minutes you have to be ready. But I say: ‘I want to be part of the team, of the game, I want to move and pass and not just wait for the ball’. That’s why I am always looking for space to get the ball and find my teammates. I can work on everything still. But one thing? Maybe to shoot from distance.”