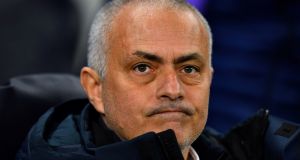 José Mourinho believes that finishing the season in the Premier League top four would be one of the best achievements of his career as Tottenham struggle through their injury crisis.

As Mourinho prepared for a return to Chelsea on Saturday afternoon after Spurs’ stale Champions League defeat by Leipzig, he again underlined his frustration at the loss of both Son Heung-min, who underwent surgery after fracturing his arm against Aston Villa, and Harry Kane.

For Mourinho a successful season this year may even rank above his second-placed finish with Manchester United in 2018, an achievement he once called “one of the best jobs of my career”.

“Tottenham without Harry or Sonny, without one of them, doesn’t win a match since 2014,” he said. “That means a lot. That means that Sonny and Harry score the majority of goals that Tottenham scores. This season was so, so negatively special that we are going to be without them both at the same time for a lot of matches.

“If we manage to finish top four it’s something incredible. Incredible achievement for the boys. So we have to give everything we have.”

There will be an even brighter spotlight than usual on Mourinho when he returns to Stamford Bridge against his former captain Frank Lampard. As vigorously as he underlined the significance of Spurs’ injury crisis, Mourinho played down the relevance of his return to the club that he led to their first League title in 49 years in 2004.

“No. No, not special. One more game. Because I am a professional, because as I told every time I played for my previous clubs, I belong 200 per cent to my club,” he said. “And that’s it. The only different thing would be that from the end of the game I can walk from the stadium to my house. But even that I will not take advantage of because I will come back with my players.

Despite injuries casting a shadow over his club, a tough run of Premier League, FA Cup and Champions League matches ahead and a 12.30pm start on Saturday, Mourinho was in a good mood.

He paused his press conference to pump his fists towards passing children from Tottenham’s youth groups, and he initially responded to the question about United’s 2018 season by jokingly referencing the ongoing legal disputes of Manchester City, that year’s champions: “Maybe I win that title.”

Mourinho’s underlying message was that a “good test” awaits his injury-riddled team at they battle for a place in the top four. “In three months we went from being close to the relegation position to being one point from the top four. Amazing effort by everyone.

“So now that we are in this position, we earned the right to fight for it. It is difficult. At the moment probably lots of people think this will be impossible, but we are going to fight, and look specifically to this match which is the only thing that matters now. Let’s go.” – Guardian

Ken Early on finishing the Premier League season, favourite sporting moments 08:03
New Zealand Rugby forced to cancel lower tier competitions 07:20
Harry Kane: I won’t stay at Tottenham ‘for the sake of it’ 07:39
Competitive instinct will ensure sport returns as it always was 06:30
Ken Early: Despite coronavirus, Premier League season must be finished if at all possible 06:00

1 Ken Early: Despite coronavirus, Premier League season must be finished if at all possible
2 Harry Kane: I won’t stay at Tottenham ‘for the sake of it’
3 My favourite sporting moment: When Zidane glided through Brazil in 2006
4 ‘Magnificent’ Conor Connelly remembered after sudden death
5 Favourite sporting moment? It’s a bit like choosing your favourite child . . .
Real news has value SUBSCRIBE