Cork travel to Dundalk hoping not to lose more ground 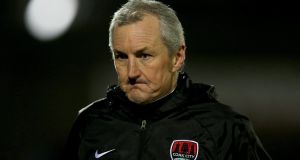 Having kicked off the season with a morale boosting win in the President’s Cup, Cork City now head to Oriel Park where the stakes might be said to be somewhat higher. Dundalk are looking to extend a run of nine games unbeaten in the league against their rivals and if City lose this one they’ll be six points behind the champions with just four games played.

“It is about us making sure that we go out there with a proper gameplan,” says John Caulfield, “that we have the attitude we had the other night (when they beat Longford 6-0) and that we target the areas that will cause them trouble. It is important for us to get at them, show how good we are and play with the intensity that we can.”

Dundalk may feel they have a point to prove after the defeat in Turner’s Cross a few weeks ago although they may feel they’ve made it since with three straight wins and plenty of character displayed the other night at Wexford Youths, where they bounced back well after conceding a late equaliser.

Stephen O’Donnell returns after illness caused him to miss that game while Cork have Greg Bolger back from suspension but the visitors have a few problems too, most obviously doubts about Gavan Holohan and Stephen Dooley who could be forced to join existing injury absentees John Kavanagh and Garry Buckley on the sidelines.

The hosts add Killian Brennan and Dean Clarke to an injury list that had already included Stephen McPhail and Luke Byrne.

Two of the other sides to have made strong starts to the campaign meet at the Brandywell where an unbeaten Galway United team faces a Derry City. Armin Aganovic (ankle) and Marc Ludden (knee) miss out again for the visitors.

Wexford go to Dalymount where they will be hoping to get their first points on the board by beating Bohemians.

Wexford were unlucky by all accounts not to take anything from the games against Shamrock Rovers or Dundalk and Shane Keegan, who will again be without Shane Dunne, Peter Higgins and Aidan Kennan, went as far as to describe the two performances as the best the players had ever produced during his time at the club.

Bohemians manager Keith Long is somewhat less complimentary about his side’s performance in Inchicore during the week and his hopes of sparking an improvement this time out are not helped by the suspension of Ismahil Akinade as well as doubts about the availability of Anto Murphy, Stephen Best, Lorcan Fitzgerald and Eoin Wearen.