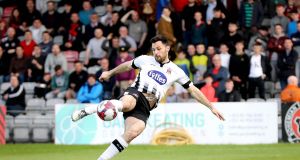 After back to back wins against a couple of the division’s lesser lights, Bohemians again ran into trouble against one of the top three. As they had done previously against Waterford and Cork, Bohemians dazzled at times but just like those other two games, this one ended in defeat.

Keith Long sought to tighten things up against the league leaders by starting with five at the back but it could have been six or seven and still have made no difference given the way his players defended the opening goal. Seán Hoare’s deep cross allowed Michael Duffy to give an early indication of the aerial dominance he would enjoy over Keith Buckley, leaving Pat Hoban an age to decide where to would put the knockdown from barely six yards out.

Four minutes in and already the Dubliners had given themselves a mountain to climb.

They gave it a go, to be fair, and had spells in which some of their football was as easy on the eye as anything Dundalk can produce. Their visitors, though, tended to be a little more economic and a good deal more effective when it came to their approach work. And while Dinny Corcoran had a close-range shot cleared off the line by Chris Shields – Hoban, Brian Garland and Hoare (twice) all threatened to double Dundalk’s advantage before the break.

It was good, open and entertaining stuff to watch with Dylan Watts catching the eye again thanks to his ability to produce a pass that can unlock a decent defence. The young midfielder came up just a little short when it probably mattered most when Corcoran sent him clear through on Gary Rogers, who must have been relieved that the attempt to lob him was not a lot better.

Stephen Kenny, of course, has players who affect things in key areas too and Hoare was terrific at times, with his power posing a real challenge to the hosts. Shields imposed himself well too while Jamie McGrath looked to be enjoying himself when he had the opportunity to get on the ball with the 21-year-old dancing his way out of tight corners on a couple of occasions.

Still, by the end, he should have had a goal with a low, left-footed effort after 70 minutes slipping wide of the post when really it should have been turned safely towards the bottom corner before Hoare showed him how.

Duffy had just gone close with a fiercely driven strike that Shane Supple had spilled behind for a corner. Dane Massey chipped back across the face of the goal and Hoare left everyone else looking as though they were rooted to the spot as he climbed high and headed home.

It somehow seemed at the final whistle that Bohs were simultaneously unlucky to have lost and blessed not to have beaten by a few more. At least the six points secured against Bray and Sligo has taken the pressure off for a bit. For Dundalk, it is relentless but they are coping quite nicely just now.