Airtricity League round-up: Derry get the better of Cork 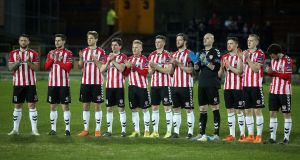 Derry City celebrated the retirement of Mark Farren’s No 18 jersey with an impressive win over Cork City at the Brandywell.

The jersey, which was presented to his wife, Terri-Louise before the kick-off by Ireland and West Brom winger, James McClean, was applauded by the attendance of 3,000.

And in the 18th minute, the striker’s memory was marked by another round of applause. The win, therefore, will put to bed last weekend’s disaster against Finn Harps and, no doubt, new Derry boss, Kenny Shiels will have slept well after last night’s hugely improved performance.

For Cork City, however, the slender defeat will prove disappointing, but the late dismissal of Greg Bolger will have compounded their woes - the midfielder now set to sit out an automatic three match ban.

Overall, scoring chances were at a premium throughout the opening period, but it was the home side who created the best of them.

However, the best change of the opening half arrived on the stroke of half-time.

Derry’s, Ronan Curtis did well to pick the pockets of Greg Bolger and as the winger bore down on goal, he opted to pass the ball to the advancing Barry McNamee who lashed the ball high into the side setting and a superb chance was lost.

McNamee, however, made amends in the 59th when involved in a superb flowing move up the left flank. The Donegal man combined well with Curtis to set the winger in to guide a low shot into the net giving McNulty no chance.

Cork boss, John Caulfield, then introduced two strikers with Karl Sheppard and Mark O’Sullivan brought into the play in an attempt to redress the balance but the “Leesiders” problems doubled when they had Bolger dismissed.

The midfielder was shown a straight red card in the 80th minute when he brought Curtis crashing down to earth with a tackle from behind as the winger attempted to hit on the break.

Cork huffed and puffed afterwards with 10 men but with Derry centre-back, Ryan McBride, giving a captain’s performance, it was to be Derry’s day, their season now up and running.

Shamrock Rovers maintained their unbeaten start to their campaign after overcoming Wexford Youths by 2-0 at Tallaght Stadium.

Despite the hosts creating half-chances for Maxime Blanchard and Gary McCabe, there was a lack of cohesion to their early play with Wexford comfortably repelling their attacks, gaining confidence with every minute.

Brandon Miele managed to threaten on two occasions either side of the half hour mark but his initial incision in the 29th minute was curtailed by a timely interception by Lee Grace.

Within two minutes, the winger broke the Wexford offside trap but his first touch from Gavin Brennan’s through ball was found wanting as Graham Doyle gathered comfortably.

As the home side’s troubles continued, the visitors managed to create a couple of chances on the counter-attack and they should have done far better in added time but Danny Furlong lacked the required control to take advantage of an inviting Aiden Friel cross.

If Furlong was culpable on that occasion, he could count himself desperately unfortunate within two minutes of the restart when his goal-bound effort from 10 yards was repelled superbly by Murphy, who deflected the ball behind.

From the resultant corner-kick, taken by John Bonner, the home defence was marked absent but an unmarked Furlong failed to capitalise, heading wildly over from six yards.

The momentum of the game swung towards the hosts on the hour mark with Wexford goalkeeper Doyle at fault as he failed to gather a Miele free-kick, leaving Danny North with the simplest of tasks to poke home from a yard out.

The hosts failed to build on that goal, however, and a defensive lapse by David O’Connor in the 78th minute should have erased their lead but Barry Murphy once again excelled with an excellent stop to deny namesake Paul.

The contest was effectively settled in the 89th minute as Grace was adjudged to have fouled substitute Pat Cregg with McCabe confidently despatching the resultant penalty to secure a second successive league win for the Hoops.

Despite a promising start, Longford never coped following the first half dismissal of captain Conor Powell as Christy Fagan broke their resolve with a 65th minute winner at the City Calling Stadium.

Two minutes later, visiting keeper Brendan Clarke and Shane McEleney got their wires crossed coming for a long ball. Though Haverty nipped in to get there first, St Patrick’s were relieved to see the ball go wide.

The Dubliners had another let off on 23 minutes when Simon drilled wide across goal from Kevin O’Connor’s shot. But St Patrick’s came alive as the half wore on with Ian Bermingham galloping forward to shoot wide. Fagan was then inches off target with a turn and shot after incisive approach play by Billy Dennehy.

The game changed utterly when Longford suffered a telling blow, albeit self-inflicted, a minute before the break when Powell was dismissed for a second yellow card after tripping Conan Byrne.

St Patrick’s owned the ball in the second half, finally getting their match winning goal 20 minutes in. Byrne’s precise delivery from the right to the back post was headed down into Fagan’s path by Graham Kelly for the striker to blast a volley past Paul Skinner to the net.

Galway United finished with a flourish to maintain their encouraging start to the season at Eamonn Deacy Park.

Tommy Dunne’s improving side eked out another deserved win scoring four times in the second half as Bray couldn’t deal with the terrific Tribesmen.

Buoyed up by last week’s away triumph over St Patrick’s Athletic Galway shaded a tight opening period with Vinny Faherty going close twice before the break. When the interval rolled around Mick Cooke’s visitors’ were content to be departing on terms.

Having already seen Conor Kenna, Dean Kelly, and Jason Marks substituted due to injury Bray were forced to conclude the match with 10 men when Sean Harding limped off in the 62nd minute.

Galway netted a second on 82 when Bray substitute Paul Finnegan deflected the ball into his own net following a Colm Horgan cross. It was turning into a distressing trip west for Bray as Faherty and replacement Ruairi Keating sealed the deal with late Galway goals.