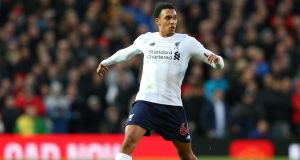 Jürgen Klopp has said the responsibility Trent Alexander-Arnold shoulders as the only local regular in the Liverpool team should not be underestimated as the defender approaches a century of games for his boyhood club.

Alexander-Arnold will make his 99th appearance for Liverpool on Sunday if selected against Tottenham, the team he made his debut against in a League Cup tie three years ago on Friday. At 21, he has played more games for Liverpool than Steven Gerrard or Jamie Carragher had at the same age, and he is also the youngest player to appear in consecutive Champions League finals.

Klopp admits the right-back, who has recovered from the illness that ruled him out of the Champions League win at Genk, has a bigger task than most at Liverpool having grown up in West Derby, home to the club’s Melwood training ground.

When you are a scouser in the Liverpool team, it makes the game away at Manchester United even more difficult

The Liverpool manager said: “Trent has a mix of personal education, football education, character, skills, attitude, mentality, and he is on top of all that. He is absolutely a scouser in the best understanding. It’s a big task to be a scouser as a Liverpool player because you are responsible for pretty much everything. So he has all the good things.

“On the outside, when you are a scouser in the Liverpool team, it makes the game away at Manchester United even more difficult because everyone is talking to you the whole week about that. Apart from that he is so impressive. When I first saw him, I saw that this is something special but he had to work hard to make that really obvious. It’s really a pleasure to work with him, to be honest. He is very aggressive in a positive way.”

Liverpool are unbeaten in 44 Premier League home games going into Spurs’ visit. It is the second-longest unbeaten sequence on home soil behind Chelsea’s record of 86, and Klopp has said the key is the belief shared by his players and the crowd. That belief, he claimed, evaporated among the Manchester United crowd last Sunday the moment Adam Lallana equalised.

Klopp said: “If you win the gold medal at the Olympic Games you don’t win the gold medal again next time because you won it last time. You win it because you ran quicker than the others again. The only thing we have to respect and use is the good things we do in home games. We do not do it only in home games, but have this run because we put in a specific mix of attitude and the potential of the boys, plus the crowd. That can make life difficult.

“We saw that in Manchester last week. The Manchester crowd was really good until we scored the equaliser and then it was [clicks finger] done. That is something that is different here. Okay, somebody can score an equaliser but it does not mean we cannot win the game anymore. These are the things we have to keep. We all worked for it and deserve it and earned it together but cannot take it for granted. Against Tottenham especially.”