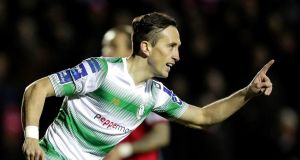 One obvious route to achieving a portion of the improvement that Harry Kenny is hoping for at Richmond Park this year would be for his St Patrick’s Athletic to take more than the three points from Shamrock Rovers that Liam Buckley’s side managed last season. They are off to a poor start, though, losing here to an Aaron McEneff penalty despite their rivals never quite hitting the sort of heights they would have hoped for.

Ireland assistant Robbie Keane was there to watch and while it’s hard to imagine he saw enough quality on display from anyone to prompt any late call-ups, he most likely enjoyed a full blooded encounter that both sides clearly wanted to win.

Rovers generally made the better fist of it and will feel they did enough to deserve all three points, with Stephen Bradley’s side creating the better of the opening half’s chances and being gifted the standout one after the break. The lead they enjoyed through most of the evening still came down to the penalty they got for a Kevin Toner challenge on Aaron Greene, however, and their failure to make the game safe when they should have meant the hosts kept chasing the equaliser they clearly never had any reason to believe was beyond them.

McEneff put the spot kick away rather coolly but was as guilty as anyone after that on the sloppy finishing front, with the midfielder missing the target pretty badly after some neat build-up play by Dan Carr and Greene. Carr had already passed up on a fair chunk of open goal by that stage while Brandon Miele and Mikey Drennan might well have done a good bit better at the other end.

Still, nothing quite compared to a miss by Aaron Greene late on that utterly delighted the locals. Toner and Brendan Clarke, who had a good night in goal for the hosts, suffered a fairly major breakdown in communications and it briefly looked as though the Rovers striker had got very lucky indeed as he ended up goal-side of both of them with the ball dropping nicely. Unfortunately he spoiled it all by trying a first-time volley that few well wide.

It was scrappy but spirited stuff in between with neither side able, it seemed, to really get their foot on the ball and exert some real control on things. Two of the more likely influencers, Ronan Finn and Chris Forrester, were quiet, at best, but Rhys McCabe had his moments for the home side and Jack Byrne was impressive again for their opponents, looking hungry to get on the ball then use it well, before being replaced for the closing stages.

The battle between Simon Madden and Trevor Clarke down one flank provided evidence of the passion involved but Kenny’s men couldn’t quite push the game up the pitch far enough to sustain any real pressure, and though Trevor Clarke had to clear off the line towards the end, Rovers generally looked just about on top of things.

Drennan certainly struggled to make a real impact despite an obvious willingness to chase after anything knocked in his general direction. The closest he came to the break he probably needed was when Roberto Lopes completely missed what should have been a routine clearance allowing the striker to take off into the space behind him. In the end, though, his curling cross for Dean Clarke had a bit too much on it.

By then, Kenny has sought to step things up by throwing on Gary Shaw but Rovers, who would have had a second goal themselves but for a fine Clarke save, held on for a win that leaves them two points clear at the top of the table. Now, that’s a real improvement.