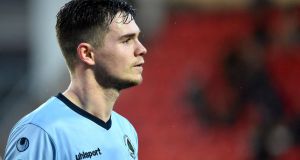 Michael McCrudden: will be out for up to three months after breaking a metatarsal in training. Photograph: Stephen Hamilton/Inpho

Derry City striker Michael McCrudden will be out for up to three months after breaking a metatarsal in training this week. Declan Devine describes the loss of the former Institute player who scored 19 Irish League goals before moving to the Brandywell last month as “a real blow”.

“I’m gutted for Michael,” says the Derry manager, “because we felt he was really starting to make his presence felt. He has been fantastic in training, and gives us such good options in games.”

McCrudden had yet to find the target for Derry, though, and the club are still the second highest scorers at this early stage of the season. It will make for an interesting game against Bohemians in Dalymount this Friday, with the hosts having yet to concede.

The Dubliners have an unchanged squad again, while the only team above them in the table, cross-city rivals Shamrock Rovers, must wait to check on the fitness of Ethan Boyle. Rovers have Aaron Greene available after the striker was spared an additional suspension for his sending off at Dalymount a couple of weeks ago.

After a fairly straightforward defeat of Finn Harps on Monday, Stephen Bradley’s side faces what is likely to be a tougher test on Friday evening with St Patrick’s Athletic still unbeaten under new manager Harry Kenny. “It will be a difficult game,” says the Rovers boss, “they’ve got some good players”.

“The likes of Gary Shaw and Brandon Miele know how we like to play, and we know how they like to play. They’d know little details and vice versa. But it’s different tomorrow when you’re in the heat of it. Those things can get lost.”

Dean Clarke’s return means Kenny has a full squad to pick from. Others are not so lucky with Chris Shields and John Mountney adding to Dundalk’s injury problems, Gareth Harkin out for Finn Harps after sustaining what appeared to be a serious Achilles injury in Tallaght, while Kevin Lynch and Bastien Héry are both doubts for Waterford as they head to Oriel Park.