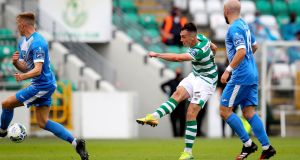 Having dropped points for the first time this season against St Patrick’s Athletic, league leaders Shamrock Rovers face into the second of three back-to-back Premier Division Dublin derbies anxious to avoid another slip up when they host Shelbourne at Tallaght Stadium on Friday night (7.45pm).

Everyone at the club seems to share the belief that they should have won Sunday’s game well but midfielder Aaron McEneff reckons the games against local rivals remain that little bit harder to call, even without the fans that are supposed to make them that little bit special.

“We also know the importance of these games and how they can swing because of the derby feeling,” says the 25-year-old who Stephen Bradley suggests has become the “most complete” midfielder in the country since his move from Derry City at the start of last season.

“It’s a strange one now with no fans,” he says, as he contemplates the visit of Shelbourne. “The intention [at Richmond Park] was to take that derby feeling out of St Pat’s because we knew that they’d be up for it and I thought we did that well in the first half.

“But you have to give them credit as well because they put their bodies on the line and if there wasn’t that derby feeling maybe they wouldn’t have defended so much [after they had Shane Griffin sent off].”

Rovers retain a four-point advantage over their next league opponents, cross-city rivals Bohemians, and McEneff is still happy that they are on nicely on course at the top of the table with little chance, he insists, that the pressure which comes with setting the early pace might unsettle them.

“I think the mentality since winning the FAI Cup final has definitely changed,” he says. “It gave us a lot of confidence, winning that cup final, because we always knew last year that we were a good team and we played nice football, moved teams and we were good to watch at times.

“But I think when we won something we knew that we could kick on from that, and I think that’s what has happened. The players have sort of taken it to another level this year.”

Shelbourne’s Karl Sheppard is suspended for the game which Lorcan Fitzgerald will also miss. Graham Cummins is suspended too as Cork City head to Derry for the game’s earlier top-flight fixture (5.45pm) while in the First Division, Colin Fortune takes temporary charge of Galway United for the visit of Bray Wanderers following Alan Murphy’s departure this week.