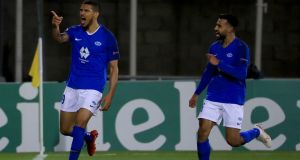 Dundalk will travel to an empty Emirates next week with a clearer sense of just how challenging this Europa League campaign is going to be. In their first outing here, they led the group’s third-ranked side and did well for spells against what were capable opponents. Molde, though, made most of the running and having ensured their dominance counted in the second half they are bound to feel they deserved their win.

The hosts will point to the second goal they might have had in the first half and feel that it would have made for a very different game. They looked stretched through much of the one we got, however, and will hope to generate an improvement as they get to grips with the greater pace of things at this level over the coming weeks.

In terms of possession, the Norwegians started well, rolling out a game plan intended to exploit the space either side of a compact Dundalk defence and capitalise on the opportunities when the home team cleared set pieces. Its potential soon became apparent as their two full backs, Marcus Pedersen and Kristoffer Haugen, grabbed every opportunity to run well beyond the Dundalk wide men so as to get on to the end of angled balls from team captain Magnus Eikrem.

Michael Duffy and John Mountney were repeatedly forced to chase back after them and both did some great work. Still, there were occasions where the visitors should have made much more of their initial efforts, with a string of corners all they had to show by the break for all the impressive passing and forward movement.

It was from one of the set pieces, though, that they came closest to scoring. On three or four separate occasions Dundalk would clear the ball to the edge of the area where Pedersen would take possession in space. He squandered a couple of the resulting opportunities but 33 minutes in teed one up perfectly then sent it flying inches wide of the left-hand post.

Dundalk weren’t posing such a regular threat but when they got forward they looked dangerous and by the time Pederson was forcing Gary Rogers into doing something more athletic than coming under a cross, the home side had already had a goal disallowed.

The movement leading up to it had been quick and purposeful with Greg Sloggett feeding Pat Hoban who moved the ball out wide to Duffy. When it came back in, Haugen got his head to it but the clearance was nothing like complete and Hoban turned the ball in only to be penalised for a push. It all seemed rather soft.

There were echoes of it all about the goal 10 minutes before the break with Seán Gannon this time setting up the cross for Mountney whose delivery from the right was almost perfect. This time, there wasn’t a defender to be seen with Seán Murray having lost them all somewhere along the way. From the moment he made contact, the ball was clearly going in, a third headed goal in three straight European games from a midfielder who had never scored one like that in his career before the start of the summer.

Molde seemed slightly stunned by the setback and the way in which they had been opened up but they bounced back strongly in the second half, subjecting Dundalk to a lengthy spell of pressure as they searched for an equaliser. Rogers did really well to deny Stian Gregersen a close-range header at once stage and a follow up show was deflected wide by the defender.

The home side was less fortunate a few minutes later, though, when the Norwegians worked the ball out to the right once more and Pedersen pulled his cross back to Etzaz Hussain who had a bit of room in which to line up a volleyed shot. He still benefited from a deflection off Gannon that sent the ball into the bottom-right corner.

Molde continued to have the better of it after the goal and when Gannon tried to prevent Erling Knudtzen getting past him inside the area, Ohi Omoijuanfo got the opportunity to put his side ahead from the spot, which he did.

Filippo Giovagnoli sought to shake his side up, making four substitutions in the space of a couple of minutes, with a view to changing the shape and adding a second striker. There was no lack of urgency about the pursuit of an equaliser by his side that followed late on and there was certainly some late pressure. But the visitors coped well enough and despite a half-chance for Daniel Cleary, Andreas Linde wasn’t troubled again.