Cork staring relegation in the face after draw with Waterford 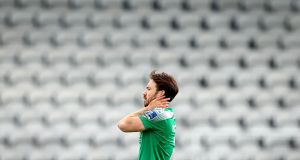 Cork City’s hopes of avoiding relegation from the SSE Airtricity League Premier Divison took another huge blow as they were held to a 0-0 by Waterford on Saturday night.

The Rebel Army failed to add to their low tally of just eight goals this season and they remain bottom of the table, one point behind Finn Harps who now have two games in hand.

Colin Healy’s side were looking to end a winless run of eight games in all competition – seven of those coming in the league – but in the end they were left to rue a number of missed chances.

Deshane Dalling, Dylan McGlade and substitute Kit Elliott all went close to scoring for the Leesiders while Cian Coleman did find the net in the second half but his header was disallowed as he was adjudged to have committed a foul.

Waterford could’ve snatched it themselves in injury time with former Republic of Ireland striker Daryl Murphy missing three great openings as they missed the chance to climb back above Dundalk and into third in their bid to secure European football for next season.

Unbeaten Khabib to retire after UFC 254 win over Gaethje 10:12
Justin Thomas finishes with a kick to lead by one in California 07:46
Ulster aiming to douse Dragons’ fire and extend unbeaten start 06:00
A season like no other: The key games that helped Shamrock Rovers secure an 18th title 00:18
Liverpool come from behind to beat Sheffield United 00:19