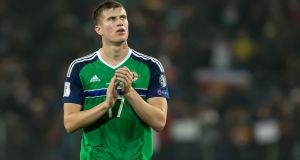 Northern Ireland manager Michael O’Neill has criticised what he sees as the FAI’s ongoing policy of recruiting players from the North. He suggested that he will try to sort out a deal with his opposite number, Martin O’Neill, on teenagers who have already been capped at underage level.

Players born in the North are automatically eligible to declare for the Republic under a specific rule that was drawn up in the wake of the Good Friday Agreement. A significant number of young players have made the switch before that under previous rules and since then - and while many fail to progress to the senior ranks, Martin O’Neill’s current squad contains several regulars from north of the border including James McClean, Shane Duffy and Eunan O’Kane.

“I don’t have a problem with James McClean who was 22 years of age, he knew what he wanted,” says the Northern Ireland boss who spoke with McClean about switching back after taking on his current job back in 2012. “I have a problem when it’s a 16, 17 or 18 year-old having to make a decision on his international future. What is the point in asking a player to change his international allegiance, to make a decision about his whole international future, and then not pick him?

“Daniel Devine of Partick Thistle is a West Belfast boy and would have gone to the Euros with us. Only he can’t play for Northern Ireland as he’s signed an international transfer. I can list you 10 players who have made that decision and have never represented the Republic.”

Croyden born Huddersfield midfielder Sean Scannell is, meanwhile, about to make a switch in the opposite direction it seems with O’Neill remarking that the 27 year-old who previously represented the Republic from Under-17 up to Under-21 levels is “coming to us”. The manager, though, claims that the situation is different.

“I always look at the team before a game and typically eight to nine of the 11 are Northern Ireland born,” he adds. “It’s something that I’m quite proud of, and also that both sides of the community are represented.”

The comments are contained in an interview with The Daily Mail in which O’Neill also suggests that the Dublin based association is selective about who it approaches. “The FAI only ever approach one type of player: Catholic,” says the former Hibernian boss who apparently believes that Sunderland defender Paddy McNair was contacted in the mistaken belief that he was a Catholic.

O’Neill says that he is hoping that he can come to an arrangement with Martin O’Neill that will help to address what he clearly sees as a problem.

“I hope that Martin and I can get some sort of gentleman’s agreement whereby if a young player has represented Northern Ireland at aged 17 to 21, the FAI don’t ask him to change,” he says.

If a particular player “turns out to be a superstar,” he suggests, “the FAI can get him before I cap him; they just have to stay on top of it.”

1 Conor McGregor stops Donald Cerrone in 40 seconds on UFC return
2 St Michael’s conveyor belt showing no signs of slowing down
3 Glasgow slam European door shut on Munster
4 Ulster huff and puff their way past Bath and into the quarter-finals
5 Welcome to Iten in Kenya – home of champions and cheats
Real news has value SUBSCRIBE
Crossword Get access to over 6,000 interactive crosswords