FAI head says he did not believe O’Neill would go to Stoke, but needed time to decide 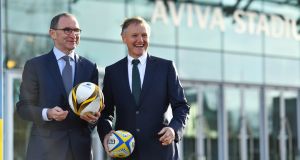 Republic of Ireland manager Martin O’Neill and Ireland head coach Joe Schmidt at the announcement that Aviva Ireland is extending its naming rights of the Aviva Stadium until 2015. O’Neill will sign a new contract ahead of the Nations League draw on Wednesday, said FAI chief John Delaney. Photograph: Brendan Moran/Sportsfile

Martin O’Neill needed some time to consider his position as Republic of Ireland manager in the wake of his team’s hefty play-off defeat by Denmark, said John Delaney on Wednesday. But, having weighed up the alternative offered by Stoke City at the weekend and decided against taking it, the 65 year-old is, the FAI chief executive insists, fully committed to doing the job for the next two years.

Representatives of O’Neill are due to meet the association’s legal people next Monday, and Delaney says that the manager’s new contract will, finally, be signed ahead of Wednesday’s Nations League draw in Lausanne. He admitted that the situation has not been ideal in recent weeks, but suggested that the 5-1 loss in the play-off had come as an unexpected shock to the system. But, he maintains, the association was never tempted to reconsider its position as it continues to believe that the manager has done a good job.

“After the Denmark game, which was a blow, he’ll tell you that himself, he took time out himself to see if he wanted to stay with the Republic of Ireland,” said Delaney. He was speaking at the announcement that Aviva has taken up the first of two options to extend its naming rights for Lansdowne Road by five years.

“It’s understandable. This is not Premier League football where you have to appoint a manager within a week. Our next game is Turkey at the end of March and he took some time. He came in, there were obviously some conversations in between that and he came in last night and told me and Michael Cody [the association’s secretary] he wanted to stay and he will sign his contract prior to the Nations League draw. That’s what’s going to happen.”

Delaney said that, contrary to reports in recent days, there is no clause in O’Neill’s contract specifically allowing him to speak with interested clubs, but rather there is simply “an understanding” between the two sides that this might happen.

“He has been very open with me about any approaches that have been made in the past,” said Delaney.  “They haven’t got as much publicity as the week gone by but there have been other clubs who certainly have approached him, ye know that, and he’s always come back to me and said, ‘Do you know what? I want to stay with the Republic of Ireland.’ When you analyse everything that’s happened, that’s what he is doing.

“Everybody is entitled, if they want, to speak to somebody who has approached you,” Delaney continued. “If an employee wants to leave an employer nobody can stop them. All you will do at that given stage is get the compensation that is due to you.

He shrugged off the suggestion that the week of very public uncertainty has been damaging for the association and suggested that he had always felt that O’Neill would ultimately stay – although clearly, it seems, he was far from certain.

Delaney said, meanwhile, that Aviva’s renewal is good news for the association as it continues to work to deal with the huge levels of debt it incurred as its part of the costs of redeveloping Lansdowne Road.

He declined to give any detail of the value of the extension, but the financial aspect of it was negotiated when the original 10-year deal was put in place, and it is believed to be broadly in line with the figures agreed then, with an increase to allow for inflation.

The initial agreement was worth a total of €44 million from Aviva over its 10-year term, although this was then sold on by the FAI and IRFU to an investment fund organised by NCB, now part of Investec, for around €35 million so that the money could be taken up front.

It is believed that the five-year extension might be worth in the €25 million to €27 million range. That could, based on the previous figures, be sold on for a little over €20 million to a fund or institutional investor, but it is not known at this point whether either association would be as anxious to securitise the deal this time around.

“We will outline in the first six months of this year our overall financial strategy for the next number of years,” Delaney said. “But this deal was very much in line with what we wanted to do, in terms of putting our plans together.

“It’s a significant deal for all three parties, [and Aviva] also have an option to go for five more to 2030 if they wish to do so.”

1 Connell losing touch with the club championship is the real tragedy of Normal People
2 Ghosts and goalposts: The soul of street football in Dublin’s Gloucester Diamond
3 Rugby clubs in crisis: ‘I fear you may find a lot of players won’t go back playing at all’
4 Ian O’Riordan: Dreaming of one-way cycling over the Military Road
5 Liverpool and Everton to oppose plans to play games at neutral venues
Real news has value SUBSCRIBE
Crossword Get access to over 6,000 interactive crosswords