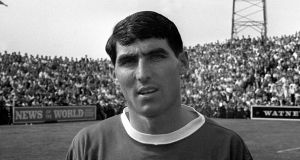 Republic of Ireland international Tony Dunne, rated as one of the best left backs ever to play in the English league, has died at the age 78. The Dubliner was a member of the Manchester United team that won the European Cup in 1968.

The club was among the first to pay tribute to him on social media on Monday night, describing him as: “One of our greatest-ever full-backs. An integral part of the 1968 European Cup-winning side. A player who made 535 appearances in the red shirt of Manchester United. Our heartfelt condolences go to the loved ones of Tony Dunne. May he rest in peace.” Shelbourne, who he also played for, hailed his “glittering” career.

Having started out in the game as a striker with schoolboy club St Finbarr’s, Dunne made his first mark in the senior game at Shelbourne where he spent two seasons and ultimately helped the club to win the FAI Cup in 1960. A week later, on April 1st, United signed him for £5,000 and he made his first team that October against Burnley.

It was a while after that before he nailed down a regular first team spot with Corkman Noel Cantwell blocking his progress for a while. He went on to play more than 400 league games for them, however, and came close to being an ever present in his two title winning campaigns at Old Trafford, 1964/65 and 66/67.

He scored just two goals in all of his time at Old Trafford but he was known for his speed, strength, determination and crossing and Dunne produced a superb display encompassing them all in the 4-1 defeat of Benfica in the final at Wembley. Cementing his status as one of the team’s stars.

He stayed at United for another five years and remains eighth on the club’s all time appearance list. His time there came to an end in 1973 when he was released, along with a number of other long established names, by Tommy Docherty who was attempting a major rebuild.

He played on for another six seasons after dropping down a couple of divisions to join Bolton Wanderers. There he played another 170 games after a rocky start and enjoyed some success towards the end of his time with the club winning the Second Division title in 1978. He ended his playing career with Detroit Express in the NASL a year after that.

He subsequently had a couple of short spells in management but retired to Sale, in Manchester and was for a time running a driving range there. United were reported to have bought his League and European Cup medals at auction in 2011.

Dunne made his international debut against Austria in April 1962 and went on to make 33 appearances for his country. He captained the team on four occasions.

Celtic keep up the pace with comfortable win over Hibs 17:40
Dicksboro pour out all their subs but can’t stop Ballyhale tsunami 17:35
Here is your handy guide to sport on television this week 17:01
More VAR handball drama as Newcastle snatch point at Spurs 16:43
Bielsa delighted with improved defence as Leeds move for Cantwell 16:20

1 Tour de France: Every yellow jersey winner must feel guilty by some association
2 Bielsa delighted with improved defence as Leeds move for Cantwell
3 Kevin Babington: Learning to live again after life changed forever on Long Island
4 Dicksboro pour out all their subs but can’t stop Ballyhale tsunami
5 Exeter dare to dream of Champions Cup after semi-final victory
Real news has value SUBSCRIBE
Crossword Get access to over 6,000 interactive crosswords