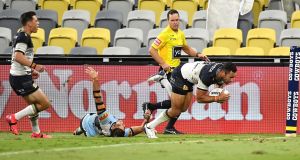 I flicked on some action from Australia’s National Rugby League to sample some fake crowd noise. Photograph: Getty Images

The Premier League announced during the week that they are partnering with EA Sports, makers of the Fifa video game series, to create the simulated crowd noise that will be available as an option to viewers when the season resumes next week.

Of course, these fake crowd noises would not be just any old canned audio, it would be something new and cutting-edge, a futuristic soundscape vaguely redolent of AI and supposedly responding to match events with exquisite sensitivity, “to replicate the vibrant atmosphere of Premier League clashes, so fans don’t miss out on the noise that goes with the action.” Did we mention that EA Sports sponsors the league?

It’s not as though audio-wallpaper crowds are previously unheard-of. If you work as a match commentator on the radio, the crowd noise is usually produced organically, reaching the listeners through the same couple of microphones the commentators are using to call the match. Some diligent commentators will bring an extra mic to prop up somewhere just to add richness and depth to the atmospherics.

But there will inevitably be times when budgets and schedules mean the commentator cannot travel to the match in person and when this happens they will be sitting in a studio somewhere, commentating on a feed they are watching on TV. In this case their microphone is picking up only the sound of their voice, which is being overlaid on the audio from the match feed.

To the listener it sounds indistinguishable from the real thing - except on those unfortunate occasions when, for some reason, the match audio feed suddenly cuts out. In those moments the commentator simply has to hope they have not been speaking at the moment when the audio feed went down. The station can act as though they have momentarily lost the connection to Old Trafford - “we’re working on getting that back for you” - but it is harder to finesse the situation in which Old Trafford appears to have been suddenly silenced, with only the commentator’s disembodied voice floating impossibly through the vacuum.

I remember one occasion when due to some technical disaster, the match audio feed had failed entirely - the video was fine, so the commentator could see the action and commentate on it, but there was no stadium noise coming through whatsoever. With only minutes to air, what to do?

A desperate solution was found - an improvised wallpaper crowd - the audio feed from a different match that had been played a few days before. The commentator got on with it like a pro, and everything was going more or less OK. Then, midway through the first half, the crowd erupted in a sudden and sustained roar - the kind that was sure to attract the attention of even the most absent listeners. Yet whatever it was that had got the crowd so excited, it seemed the commentators either hadn’t noticed, or were attempting some kind of cover-up.

After 30 seconds or so, the unmistakeable voice of the Anfield announcer George Sephton could be clearly heard booming forth “. . . and the goal for Liverpool, scored by number nine, Fernando Torres! ” An odd thing to hear over the stadium tannoy at Birmingham v Blackburn, or whatever the match was.

These tragic events took place long enough ago for Torres to be scoring for Liverpool; social media was in its infancy and the perplexed listeners never got to compare notes. Surely by now the march of technology will have consigned such crude glitches to the dustbin of history. To get a sense of the state of the art, I flicked on some action from Australia’s National Rugby League, whose behind-closed-doors matches are being shown on Sky Sports with fake crowd noise.

At first, as long as the camera was focused tightly on the pitch and the players, North Queensland v Cronulla Sharks looked and sounded pretty much like a normal game. Then one of the teams scored a try in the corner, a flowing move capped by one of those finishes where the scorer is straining to make sure no part of him strays into touch before he touches it down.

The move represented a crescendo of excitement which at no point was registered by the fake crowd: it just kept mindlessly generating the same level of white noise throughout.

The effect was to make you doubt the reality of what you had just seen: was that really a try just now, or was I watching a replay of something that happened earlier? The try went to the TMO and by the time it was confirmed, the audio mixer was ready to greet the decision with a big fake cheer.

There was then the conversion shot, which used the traditional camera angle from behind the kicker, so you could see the view he had of the goalposts and beyond them, the distant banks of empty seats. The ball sailed high and true over the bar and from the empty seats rose a great roar of approval . . .

Three minutes or so of NRL action were enough to tell me that I can do without simulated crowd noise. Nobody likes the empty echoes at these ghost games. In the silence, bathos seeps into everything, forcing a reckoning with the game’s essential unimportance. The hollow soundscape is altogether too redolent of the void that football is usually so good at distracting us from. And yet, to cover it up with Truman Show fakery is more alienating still.

1 Solskjær praises Martial for building himself into ‘powerhouse’ centre forward
2 No final round heroics for Rory McIlroy at US PGA
3 Shamrock Rovers battle back at the Brandywell to go six clear
4 Liverpool to sign Olympiakos left back Kostas Tsimikas
5 Tyrone’s McShane ruled out for rest of the season
Real news has value SUBSCRIBE
Crossword Get access to over 6,000 interactive crosswords