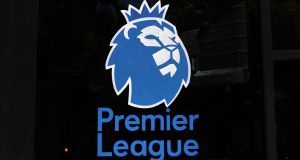 “The 2018-19 numbers are a disturbing and profoundly worrying financial outcome.” Photograph: EPA

Premier League clubs made a combined loss of over half a billion pounds in 2018-19, even before the financial pain caused by the coronavirus pandemic is factored in.

Four Championship clubs are yet to report full figures for 2018-19, but based on the minimum anticipated losses of £350m (€394m) for the second tier, it would mean the top 44 clubs in the country recording losses of almost £1bn.

The Covid-19 outbreak is set to have a significant financial impact on clubs in the top two tiers even if they are able to complete the 2019-20 season.

Premier League sides face paying a rebate to broadcasters for the late finish to the season, with reports that this will increase by £35m (€39m) for every week the season runs beyond July 26th.

Clubs in the top two divisions must also manage without matchday revenue, with all games for the foreseeable future taking place behind closed doors.

“The latest loss numbers will have already placed the Premier League clubs in a seriously difficult position leading up to subsequent and devastating public health-related events,” Roger Bell, a director of Vysyble, said.

“The Covid-19 virus is not the cause of football’s financial distress. It is merely the accelerant on what our data has very clearly and very correctly identified as a much longer-term problem.

“The 2018-19 numbers are a disturbing and profoundly worrying financial outcome from England’s senior football divisions and is symptomatic of the deeper issues with the overall financial model which we have highlighted many times previously.

“With record losses at club level for 2018-19 and just 36 per cent of Premier League clubs achieving an annual economic profit since 2009, the perception of the Premier League as ‘football’s richest division’ is clearly challenged.”

“Our data has consistently demonstrated that football has been the master of its own misfortune with an over-reliance on TV revenues, staff cost to revenue ratios regularly in excess of safe operating limits (Uefa guidance recommends 70 per cent) and a failure to recognise key financial dynamics and trends,” Bell said.

“Premier League club owners are still compelled to inject funds into their clubs with the latest balance sheets indicating an additional deployment of £910m (€1.02bn) in equity capital for 2018-19 despite a revenue record-breaking TV cycle. This has resulted in inevitable economic losses at record levels.

“Unfortunately, our predictions have turned out to be largely correct with the game now facing its most severe financial crisis in generations.”