He scored for Leicester against Liverpool a year ago, but can he step up for Solskjaer? 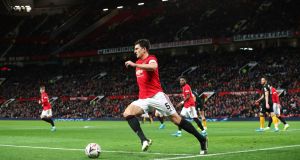 Harry Maguire swung his left boot at the ball. It cleared about 30 yards and, via some rash Wolves defending on the halfway line and a composed touch from Anthony Martial, Juan Mata was through to score the only goal in Wednesday’s FA Cup third round replay at Old Trafford.

It was job done. Manchester United had made progress in a cup and kept a clean sheet. That’s two in a row. Yet only a one-eyed United fan or an optimist of the eternal variety would suggest this was a convincing performance by Ole Gunnar Solskjaer’s team. It simply wasn’t.

True, the 1-0 victory followed a 4-0 win over Norwich at Old Trafford last Saturday, but it would be a stretch to say these matches have readied United for what they will face at Anfield on Sunday.

Liverpool have rather more impressive numbers than two consecutive clean sheets. They have not lost at Anfield in the Premier League for approaching three years – since April 2017. Their unbeaten home league run is now 51 matches. They have not even dropped a point at home in the league for almost 12 months. This is Anfield 2020.

Leicester City were the last Premier League side to get a draw there, in January 2019. Maguire was Leicester’s scorer. He has made an £80 million transfer to United since then. That in theory should be a mark of esteem; instead it has brought severe scrutiny. In the extreme manner of our times, Maguire has been both praised and ridiculed at United: said to have given a masterclass on his debut at home to Chelsea (won 4-0) and a disaster-class at Arsenal on New Year’s Day (lost 2-0).

The reality will lie somewhere in between, of course, and Maguire himself will know when he has been good or average. He is 26 – not old, but not young – and he did not set his fee. But, for £80 million, the club and its fans expect the finished article. It was the same for £75 million Virgil van Dijk at Liverpool.

Maguire may be that, and there are times when he looks like a Manchester United centre-half of Fergusonian quality, but this United team is nowhere near a Ferguson side at its best and Maguire, frankly, is having to cope. Where has Paul Pogba gone? Why is so much dependent on 22-year-old Marcus Rashford?

At Anfield, United will need a disciplined coping strategy. It will require more than tactical awareness.

Solskjaer has spoken of Maguire as “a warrior” and announced him as club captain on Friday, a leader of the club as well as the team. To be that – successfully – you must have a certain presence, and while Maguire may have hints of that, he and this United side are lacking in a quality that once defined the club.

Sometimes we describe presence as “indefinable”, then immediately supply a definition. Roy Keane is the obvious example of United’s personal presence and what it did to the opposition. Cristiano Ronaldo had it, Nemanja Vidic further back, Wayne Rooney – he scored United’s last Anfield winner four years ago.

It was physical, but also psychological, emotional. An idea of presence carried some players onto the pitch and maintained their status there even when ability began to wane. This United side do not not carry a sense of aura.

Address Liverpool individually and some of their players can lack it too, but the team, the unit Jürgen Klopp has assembled, clearly do not. They have speed, imagination, defensive nous, attacking energy and goals. They are some package and it is hard to see anything but a comprehensive home win against United.

It could even be destabilising. It is 13 months since United last appeared at Anfield and the 3-1 defeat they endured spelled the end for José Mourinho, who was sacked 48 hours later. United were 19 points behind Liverpool then, which made people gulp. Today it’s 27 points.

United are in a low moment. But inspiration can be taken from the last one – in November – when they had Tottenham and a trip to Man City on the horizon. United won both of those games, with Maguire captaining the team to victory at City. He was described as outstanding that night, overshadowing his England counterpart Jon Stones.

It was a seen as a statement victory. But the next two league games – a 1-1 draw at home to managerless Everton and a 2-0 loss at Watford – meant everyone forgot the statement.

“We have played two good games and one bad game and it has not been good enough,” Maguire has said of the season’s overall inconsistency.

Given the clubs’ fanbase relationship and given United’s current form, the travelling support would probably take another statement victory – or draw – even if it meant subsequent games were lost. At least there would be some pride to cling to.

For that to happen, Maguire will need to step up. There may have been days when he has questioned his decision to leave Leicester for United, and – like many others – he may wonder where Pogba has wandered off to and how he has been allowed to do so. But then there are so many questions surrounding Manchester United. Maguire might be answer to one of them.

At Watford the notion of presence beyond the physical leads to Troy Deeney. Watford have won five league games this season, four of them in the last month.

Their resurrection stems not just from the appointment of Nigel Pearson as their third manager of the season, but from the return from injury of Deeney.

There is a reason why we use terms such as talisman, and Deeney is an example. Watching Watford earlier this season, when Javi Gracia was still in charge and Deeney was out, was to see a team without personality. They had other attributes – and faults – but the man who stands for what they are was missing.

And it looked like Deeney’s wounded knee was noted by more than opposition defenders. Watford’s players appeared to notice it too and, perhaps with the embarrassment of the 6-0 FA Cup final defeat by Manchester City still ringing in their ears, they began this season with three straight losses.

Deeney played in the first two of those, but was then out and Watford did not win a league game until November at Norwich. It coincided with Deeney’s return to the bench.

Now they have won four of the last five and Deeney has four goals. It’s shaky Tottenham next.

Deeney says he is “the face of Watford”. He is in your face, that’s for sure. Sometimes it’s needed.