Solskjaer worried over Iran tensions, but focused on more immediate threat from Wolves 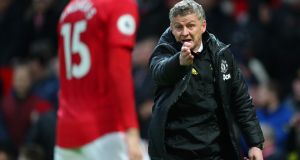 Ole Gunnar Solskjaer has revealed that fears over safety in the Middle East mean Manchester United have changed their plans to spend the winter break there.

The intention had been to take the team to the region, with Qatar’s Aspire Academy a potential destination, for a pause in the season that begins after Wolves’ visit to Old Trafford on February 1st and ends with the trip to Chelsea 16 days later. Yet tensions are high after the US ordered the killing of Iranian general Qassem Suleimani, Iran retaliated by targeting American airbases in Iraq, and Iran accidentally shot down a Ukrainian passenger plane.

Solskjaer was clear there are concerns. “If there is one thing that worries me it’s not on the football pitch; there are other things that will worry me more than football,” he said.

“We were looking at the Middle East but that is definitely not going to happen. I am going to give them a few days off. I don’t know where they will all scatter around but we will stay in Europe.”

Players are free to travel where they like during their break, including to Dubai, a popular destination.

Solskjaer’s more immediate focus is on the FA Cup third-round replay at home against Wolves on Wednesday night. With United 27 points off the pace set by Liverpool in the Premier League, this is the seventh season in a row in which the club have failed to challenge for the title. Yet Solskjaer’s team are also in the Europa League last 32 and have a League Cup semi-final second leg at Manchester City in a fortnight.

The manager was asked whether there was a danger United could become a team that compete only for cups, as they did primarily in the 1970s and 1980s.

“Supporters and the club alike are not happy with not challenging for the top position in the league,” he said. “That is where we feel we should be and many of today’s supporters have lived that period where we won the league consistently.

“At the moment we don’t have that type of team because [over] time we’ve been a bit behind the top ones. It might be that we start with winning a cup and then these players will get the taste . . . We want to be challenging for the league and the Champions League.”

During the 4-0 win against Norwich on Saturday a section of supporters chanted against Ed Woodward, the executive vice-chairman, and the owners, the Glazers. “We’ve not sat down and talked about it,” Solskjaer said. “Our focus is on performing on the pitch and we just need to stick together as a club and be united.”

Asked whether the Glazers would ever be accepted, he said: “Football supporters want to win and my job as a manager [is to do so]. If we keep getting results and start winning trophies [this] is the main thing for me.”

The replay against Wolves is the latest game in a packed schedule, yet Solskjaer believes this non-stop programme can be of benefit. “Results give you energy. We’ve still got five or six games before the winter break. It’s relentless: 18 games in less than 60 days which is physically and mentally demanding; we have to energise them.

“One good result and performance like Norwich, they felt good about that. Bad results have to be used as a motivation, as in we’re not there yet and need to keep improving.

“When I was playing I felt us as a team got the rhythm of match, rest, match, rest. Players like Roy [Keane], [Paul] Scholes and Gary [Neville] improved.”

Solskjaer has advised caution regarding Mason Greenwood potentially receiving an England call-up, the manager believing the 18-year-old has to focus on performing for United.

I think Mason will have a top and long career. Let the boy settle in first before we talk about England and the Euros

Greenwood has impressed in his first full season, the forward scoring nine times in 26 appearances while also proving a creative force. Harry Kane’s hamstring injury has placed in jeopardy the availability of England’s first-choice No 9 for the summer’s European Championship.

Solskjaer was asked whether this might mean Greenwood, who has been capped for the under-21s, could receive a senior call-up.

“I think Mason will have a top and long career,” he said. “Let the boy settle in now first before we talk about England and the Euros. His focus has to be on playing more for us, improving and when he plays more for us that’ll happen by itself. He’s just been picked for the under-21s so he’s focusing on his football.”