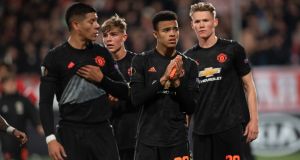 Ole Gunnar Solskjær is still looking for his first away win as Manchester United’s permanent manager. Newcastle on Sunday would seem an inviting opportunity but Solskjær is going to have to alter his team and his tactics to have any hope of beating even demoralised opponents.

This was just as presentable a chance to turn a corner, yet a United side sorely lacking in ambition and creativity were unable to take it, merely adapting to AZ Alkmaar’s level and in the end being quite fortunate to escape with a draw. They were not exactly outplayed, in a borrowed stadium in front of a crowd slightly less than the stated capacity of 15,000, though the home side created the better chances and captain for the day, David de Gea, was certainly the busier of the two goalkeepers towards the end.

Solskjær’s concerns before the game had focused on the artificial surface, though it was clear from an early stage that AZ could pose United problems with the ball in the air. Myron Boadu had the ball in the net after 11 minutes from Fredrik Midtsjø’s cross. He was correctly ruled offside, yet De Gea would not have been impressed by his defenders allowing a free header. De Gea was called upon to make the first save of the game shortly afterwards, reacting well to Oussama Idrissi’s well-struck shot, and from the resulting corner Dani de Wit put another free header over the bar.

United had started well enough, with Daniel James not only playing but initially being deployed through the middle. After the first quarter passed without a shot on target Solskjær had a rethink and put James out on the right, again not his best position, with Mason Greenwood taking up his expected central role. This almost brought immediate results, with Diogo Dalot sending James skipping down the right and Greenwood meeting his cross in the middle, only for the former Aston Villa defender Ron Vlaar to block a goalbound effort.

If that was encouraging it was also untypical of United’s first-half efforts. AZ were the ones playing a more effective counterattacking game, in that they at least were capable of moving the ball swiftly upfield and on several occasions entered the United area with purpose.

United by comparison were ponderous and uninspired, retaining possession easily enough but failing to find any penetration. At 34 Vlaar might have been viewed as a weak link in the AZ defence, but the plodding, sideways game United played made it easy for the home side to stand their ground.

Making his first start for United, left-back Brandon Williams was lucky to get away with handball in the area early in the second half. Giving away a penalty would have spoiled an otherwise confident display, though the ball struck his arm and referees are now being told to ignore considerations of intent.

Marcus Rashford was sent on after an hour in an attempt to give United a little more bite up front. In the end it was another substitute, Jesse Lingard, who shot wide with a late chance to win the match. Rashford’s main contribution, a free-kick blasted wastefully high over the bar, was more in keeping with United’s overall performance. – Guardian