Clubs from both sides of Border to discuss all-island league 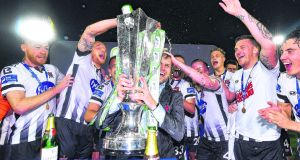 Clubs from both sides of the Border are to meet in Dundalk in three weeks’ time to hear an update on proposals for an all-island league.

The man behind the idea, Kieran Lucid, is also hoping the face-to-face meetings involved will result in mutual reassurances being provided that there is still solid interest in the idea among members of both existing competitions.

With southern clubs set to have further discussions about a standalone restructuring of the League of Ireland in Tallaght on Tuesday, there has been a sense that Lucid’s plans have been losing a little bit of momentum.

That has, in part, been down to a belief amongst some club officials in the league here that their northern counterparts are not as enthusiastic about the idea as they had publicly suggested. Lucid accepts that that sense has taken hold in some quarters but insists it is baseless.

“Absolutely, I have got that vibe but I’m a bit baffled by it,” he says. “The northern clubs were far quicker to sign up to our document and there is a lot of support for the idea there. We are hoping that getting clubs from the two different leagues into the same room will help put the whole issue to rest.”

Lucid, whose group will launch a series of videos next week that feature Irish League players, chairmen, supporters and journalists, expressing support for the venture, remains steadfast in his belief that the whole project has the potential be a hugely positive development for the game in Ireland.

The economics of it, he suggests, are “a no brainer” because of the current plight of clubs in both leagues and it has been well received in Government circles south of the border and by the two largest parties in Northern Ireland.

Clearly there are limits to be what can be achieved given that the population of the island is only six million or so, but that, Lucid points out is a million more people than there are in Scotland where the club that finishes 42nd of 42 league teams, that is the last placed side in Scottish League Two, gets around £45,000, or roughly £5,000 more than what the Irish League champions receive in prize money.

The really big difference is the Uefa money that then comes to clubs participating in European competitions but Lucid remains “positive” about the federation’s attitude to his proposals.

He has, he says, held informal talks with various figures in the European game and maintains that there is reason to believe Uefa will be “allies not adversaries” in light of the fact that the game as a whole here will benefit.

Right now, though, he needs to keep the Airtricity League clubs on board after their meeting on September 10th at the Aviva ended with the steering committee of eight clubs being asked to explore a long list of possible new structures for the existing league.

All 20 clubs will be updated on that process next Tuesday when the range of options may be whittled down but it is unlikely that any firm decision will be made to make significant changes for next year.

Lucid is still hoping to have the all island league in place for 2021 and the clubs will receive an update on the progress made on the political and revenue fronts in Dundalk although he says things continue to go well.

Also to be decided on Tuesday, meanwhile, is the line up of clubs representatives to the National League Executive Committee (NLEC), essentially the League of Ireland’s board although there was little evidence of it functioning in recent times with clubs having long been effectively excluded under John Delaney.

In recent months, the clubs have regained control of it, taking five of eight seats in a reorganised body.

In doing so, they have recovered significant power over the running of the league, something that enabled them to obtain some of the commercial figures the Premier Clubs Alliance had long been seeking. Shamrock Rovers, Shelbourne, St Patrick’s Athletic, Dundalk and Drogheda United currently hold those seats but all five will be up for election next week.