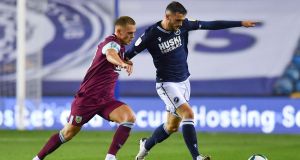 Troy Parrott was forced off at half-time after picking up an injury against Burnley. Photograph: Ben Stansall/Getty

Millwall manager Gary Rowett is hopeful Tottenham loanee Troy Parrott will learn from a frustrating debut and not be sidelined for long after he sustained another injury, which will make him a doubt for Ireland’s international fixtures next month .

The 18-year-old made his first appearance for the Lions since he moved to the Den on August 1st in Wednesday’s 2-0 loss at home to Burnley in the Carabao Cup.

Parrott, whose sole Republic of Ireland cap to date came in a friendly win over New Zealand last November, picked up a quad injury soon after he joined Millwall on a season-long loan and has missed four games so far.

He returned to fitness for the midweek clash with the Premier League club, but struggled to make his mark and had to be withdrawn at half-time.

And this setback now makes him a doubt for inclusion in Stephen Kenny’s Ireland squad for the crunch Euro 2020 play-off clash with Slovakia on October 8th, as well as the Uefa Nations League fixtures against Wales and Finland.

“Troy got a kick on the ankle early on and he is a young lad, desperate to play and he has been devastated to be injured because he wants to play games,” Rowett said.

“Obviously it’s a big blow for us because we haven’t scored as many goals as we’d like anyway and Troy was brought in to give us that extra quality but at the moment he hasn’t really been available.”

Parrott was looking to help Millwall beat Burnley for the first time since February 2012, when a goal from then-loanee Harry Kane inspired the south Londoners to a 3-1 win.

After being prolific in Tottenham’s academy, Parrott has played twice in the top flight but was sent out on loan this term to gain more experience.

Lining up in the number 10 role behind Matt Smith, Parrott was unable to get on the ball as Burnley won the third-round tie thanks to goals from Josh Brownhill and Matej Vydra.

Rowett added: “He’s such an honest kid, who is desperate to score goals and do well for us.

“And he’s fitted in brilliantly with the group and worked incredibly hard, so it is more frustration from his point of view.

“Even when he’s struggling he wants to stay out there, so everything he is doing is for the right reasons, but he has probably got to learn if he makes the injury worse, he will be out for longer.

“He is a bright lad and it is disappointing so far we’ve not really had him available, but hopefully it is not too serious and he will be available soon.”

1 Seán O’Brien: Anger over my parents’ break-up never left me
2 Plenty of positives for Farrell as Ireland hit the ground running
3 Will Connors chops his way to the front of Ireland’s openside queue
4 Ireland braced for a daunting assignment in Paris
5 France get over wobbly start to turn on the style against Wales
Real news has value SUBSCRIBE