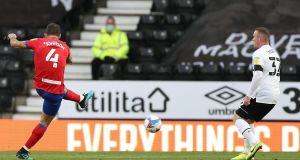 Second-half goals from Michael Morrison and Lucas Joao ensured Reading maintained their place at the top of the Sky Bet Championship with a 2-1 win at Cardiff.

Morrison nodded in Omar Richards’ free-kick two minutes after half-time before Joao fired in a second to preserve the Royals’ 100 per cent start to the campaign, moving them two points clear at the summit.

The visitors held on despite Lee Tomlin giving them a fright by tapping in with nine minutes remaining.

Joao Pedro netted the winner as Watford remained unbeaten following a 1-0 victory over rivals Luton at Vicarage Road in their first derby meeting for 14 years.

The forward celebrated his 19th birthday with his maiden goal in the 35th minute for the Hornets, who started reported Liverpool target Ismaila Sarr and brought on veteran striker Troy Deeney, to claim a third consecutive clean sheet and end Town’s 100 per cent record.

Wycombe’s difficult start to life in the second tier continued with a 2-0 home defeat to Swansea.

Andre Ayew and Jamal Lowe netted in the opening 23 minutes to maintain the Swans’ unbeaten record and leave the Chairboys pointless.

Tyrhys Dolan tapped in the opener in the 11th minute, his second goal in as many games, before Bradley Johnson returned to haunt his former employers with a quickfire double from outside the box.

Ivan Toney’s first Brentford goal, a 21st-minute penalty after he was brought down in the area, salvaged a 1-1 draw against Millwall after Jed Wallace’s early goal at the Den.

Chuba Akpom marked his Middlesbrough debut with the opener in a 1-1 draw at QPR.

Boro, without isolating manager Neil Warnock following a positive coronavirus test, went ahead through Akpom in the 19th minute only for Bright Osayi-Samuel to level shortly after.

Kieran Sadlier was successful from the spot for the Millers three minutes from time, but Jeremie Bela also converted from 12 yards at the death to keep Blues unbeaten.

Barnsley collected their first point of the campaign with a goalless draw against Coventry at Oakwell.