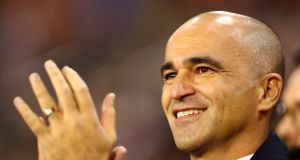 Roberto Martinez has signed a contract extension to remain as Belgium coach until 2022. Photograph: Dean Mouhtaropoulos/Getty

Roberto Martinez says he is excited to continue with Belgium’s “ambitious project” after signing a contract extension to remain as head coach until 2022.

The 46-year-old’s existing deal was due to expire this summer, having originally been timed to run out after Euro 2020 which has now been postponed until next year due to the coronavirus pandemic.

Martinez has been in charge of the Red Devils since 2016, and guided them to third place at the 2018 World Cup and the top of the current Fifa world rankings.

“I am very, very happy because this is a very ambitious project,” the Spaniard said in a virtual press conference. “Really excited.

“Our president, Mehdi Bayat, has created a very efficient environment for us to work and our CEO, Peter Bossaert, is taking our situation into a different level of professionalism and direction.

“I do feel everything is in place to work towards a beautiful legacy in Belgian football.”

Put to him that a lot of people expected him to leave this summer as there had been rumours of him taking over at a big European club, Martinez said: “Well, I think we were all so intense with the qualifying campaign with the Euros.

“I think the postponement of the Euros brings a completely different situation.

“I do believe immensely in this group of players. We’ve got a very committed staff and we all know how much the fans love the Red Devils.

“I do feel that it wasn’t the time to break that relationship, so it’s time to look forward to a very intense international period — we’ve got the Nations League, then the qualification campaign already for the World Cup and then we’ll be able to look forward to the Euros.

“So, it wasn’t the time and I do feel that our relationship needs to go further.”

Martinez’s new deal will see him remain in charge until after the 2022 World Cup in Qatar, in a double role that sees him serve as the Royal Belgian Football Federation’s (KBVB) technical director.

The news was announced by the KBVB with a short video in which Real Madrid forward and Belgium captain Eden Hazard is playing a game online while taking a phone call from striker Romelu Lukaku.

Belgium were among the favourites for glory at Euro 2020, having won all 10 games in qualifying.

West Indies sense victory over England after late surge 19:25
Jack Charlton’s own grievances endeared him to Irish fans 19:01
Capturing Irish hearts and falling asleep in the Vatican: Jack Charlton in his own words 18:11
Championship round-up: West Brom slip up at Blackburn 17:57
Burnley end Liverpool’s hopes of 100 per cent home record 17:08